I am absolutely delighted to have been asked to start off this blog tour for the new book by Carnegie short-listed author Sue Divin.  Thank you Sue, for writing this guest blog which explains your thought process and the background to the story.  I spent 18 months in Northern Ireland in the 1970s, working at a library headquarters and I have fond memories of colleagues who worked so hard to bring books and the joy of reading to the people they served.  This brings Northern Ireland life up to date, but of course there are always the underlying shadows of the past.  I will be adding my own review to this blog in the near future, but until then, I hope this inspires you to read the book.

The inspiration behind Truth Be Told

Truth Be Told is about truth, forgiveness and the stories that do not fit. Up front, it’s the story of two sixteen-year-old girls, Tara and Faith – imagine ‘Parent Trap meets Derry Girls’. It’s a pacy, contemporary YA novel set against the real backdrop of events in Northern Ireland in Autumn 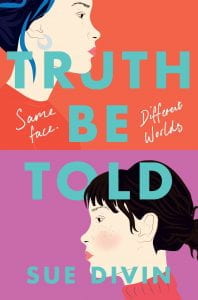 2019. Readers should expect laughs, tears, smiles and a roller-coaster of a read.
Tara has been raised by her mam and nan in Derry City. Faith lives in rural Armagh. Their lives on opposite sides of a community / political divide couldn’t be more different. Until they come face-to-face with each other and are shocked to discover they look almost identical. Are they connected?
In searching for the truth about their own identities, the teenagers uncover more than they bargained for. But what if finding out who you truly are means undermining everything you’ve ever known? Sometimes who you are, is not what you expect.
The overarching plot was just something that landed into my head in the space of a day. I’d been toying with a trilogy based on characters from Aidan’s family in Guard Your Heart, or a sequel, or going a different direction completely and writing a dystopian environmental story. None of these fully settled. There was a sense of wanting to write something similar in style to Guard Your Heart, yet different.
Another gnawing in my brain was that, whilst Guard Your Heart told a valid and authentic story from Northern Ireland, it wasn’t the only story. I wanted to tell the stuff that didn’t ‘fit’. In a writing sense, I also wanted to challenge myself to write strong, female protagonists. I’d found Aidan far easier to write than Iona in my début novel so it was like throwing down a personal gauntlet to decide to have two female protagonists.
My writing often reflects contemporary issues in Northern Ireland – stories brew and write themselves in ‘real time’ in my head. In Autumn 2019, the backdrop was no government for three years (yes, you read that right); and campaigns for LGBT rights, Women’s rights and pensions for victims and survivors of the conflict.

With that cocktail of things mixing in my brain, it makes sense to me that Truth Be Told was the 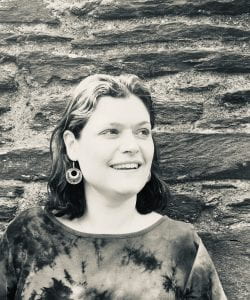 story that emerged. It’s a story with layers. Truth Be Told is about both ‘the Troubles’ and the legacy of that conflict today. At its deepest level, the novel is the story of women across three generations in Northern Ireland. Stories that are often left untold. Stories that are deliberately left out. Stories that challenge patriarchy. Woven into the narrative are also big questions. Where (if anywhere) is the line between freedom of religion and homophobia? Is violence (in many forms) ever justifiable? What’s the relationship between truth, justice and forgiveness? These are heavy themes, but honestly, there is also a lot of light, hope and humour in there too!

Truth Be Told by Sue Divin is out now in paperback (£7.99, Macmillan Children’s Books)