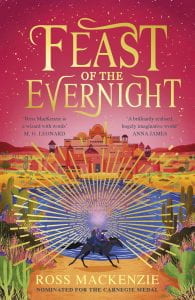 I have been a fan of science fiction since my teens, when I discovered authors such as John Christopher, with his Tripods trilogy.  Working as a library assistant when I left school gave me the opportunity to explore a whole range of genres and publishers and for Sci-Fi the lead publisher was definitely Gollancz (with their iconic bright yellow covers).  It as unfortunate that for many people the subject became less popular as we faced the reality of moving into space and the area of fantasy seems to become the replacement genre. Luckily there has been a move back towards Sci-Fi at all age ranges. 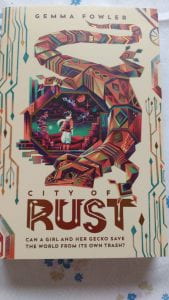 The story is set in a future world where humanity has found that the only way to deal with the amount of metal rubbish is to send it in to orbit around the earth, where it joins the space debris accumulated from satellites and rockets.  The heroine is Railey, a young girl who lives with her grandmother and has ambitions to be a champion drone racer, with the help of her bio-robotic gecko called Atti.  Things have been getting more difficult as her engineer/inventor grandmother begins to suffer memory loss and making a living is even more difficult.  When Railey is chased by a bounty hunter and thinks that her gran has been killed, she has to make a run for it; finding herself rescued by the members of a space junk vessel.  As they uncover a plot to  crash a huge ‘trash bomb’ into the earth, their loyalties are tested and they find themselves questioning the world that they live in.

The world that Gemma Fowler has created is one that has been completely overwhelmed by the amount of metal that has been discarded and it has become a dystopian place of those that have (and live in Glass City) and those that have not and live in places such as Boxville, named from the shipping containers which provide homes.  There is a real sense that we should be treating this as a window into our future if we do not do something to change the disposable world that we live in.  Scarily we have had news within the last week or so about a rocket crashing into the Indian ocean; very much a case of life imitating art!  There are elements in the plot that take me back to some of my favourite films, with the drone racing being very familiar to those who love the Star Wars series.  However this is a totally original take on the society that we live in.  There have been several books in the past that are situated in rubbish tips and but this goes several stages further and shows us as destroying the space that surrounds us.

There are some fascinating characters who are trying to find their way in this terrible world, but I think that my favourite has to be Atti, the gecko.  He is a mix of real animal ,but with the addition of bionic improvements, and he actually talks; above all he has a really positive attitude that you can’t help but love.  The ending of this story resolved the danger that the young people have faced, but we are left with the slightly open ending, which allows us to hope that we will have further adventures as they start their lives as ‘Junkers’, cleaning up the space around them.