I have been so excited for the last few weeks, ever since a golden ticket landed on my doorstep.  It was the next best thing to visiting Mr Wonka’s factory – an invitation to the celebration at Puffin books.  Despite the awful weather and a tube strike quite a few people made their way to the Strand in order to raise a glass (and some chocolates) to wish Charlie and co. a very happy 50th birthday.

The wonderful Adele Minchin from Puffin books hosted the event and we were then treated to a discussion between Luke Kelly, the grandson of Roald Dahl and Lucy Mangan, critic and author of a new book about the history of Charlie (coming out in the autumn).  The talk ranged from the number of times Dahl was turned down by publishers to the way that the illustrations have changed since the original publication.  I must admit that I had not realized that it came out in the USA before it was accepted in the UK!

With several of Dahl’s books now adapted for the stage and the number of film adaptations we have seen growing by the year, I think that his work will be  available for all to enjoy for many years to come.  However it is in the books that we see the real magic of Dahl and none of these other versions can take the place of reading the actual works, so go on, a Dahl a day keeps the blues away. 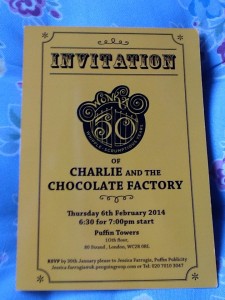 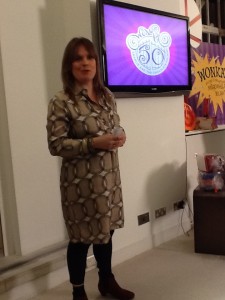 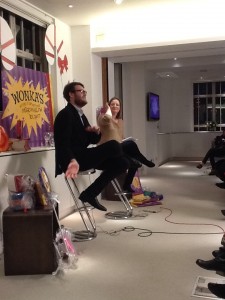 Yet again we have a bumper crop of anniversaries this year and there is a little bit of something for almost everyone.

Picture book characters that are celebrating include: 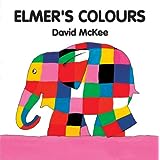 Elmer, the beloved patchwork elephant from David McKee, who will be 25 years old.  He is such a favourite not only in  the UK but right across the world and particularly in Japan.  I have to say I am very proud of my ipad case with a picture of Elmer on it.

Katie, by James Mayhew, who has introduced so many children to the world’s greatest artists, is also 25 years old.  The books can be read as beautifully illustrated stories, but they have a real place in  schools helping pupils understand and appreciate art and artists. 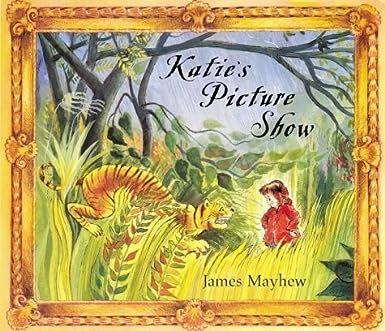 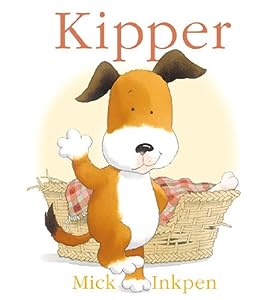 Kipper, by Mick Inkpen will be 18 years old.  Mick Inkpen has produced some of the most loved children’ s characters over the years and Kipper is possibly his most well known creation.  My particular favourite is Kipper’s Christmas Eve but that is so much younger than the original.

Clarice Bean is 15 years old. This character has developed as the years have gone on and we now have the Ruby Redfort books by Lauren Child, based on a character found in the Clarice books.

Geoffrey in “Giraffes don’t dance”  by Giles Andreae is also 15 years.  This has always brought out the extrovert in me, quite difficult really, but you just want to dance and share the enjoyment of finding your own particular way of doing it.

“We’re going on a Bear Hunt” by Michael Rosen and Helen Oxenbury is also 25 years old this year.  This is a true classic, with so many children able to tell you the story, even if they only remember the images and rhthms. 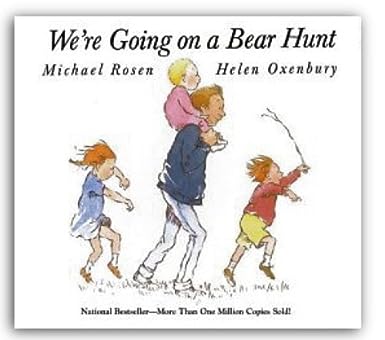 I find all of this quite traumatic as I remember them all and it only seems like yesterday since they first appeared at book selection or as a flyer from the publisher.

Books for older children start with

“Charlie and the Chocolate factory”.  Can you believe that he is 50 years old this year, whilst Dahl’s “Dirty Beasts” will be 30 years old.  See my article about the celebration for this wonderful book.

Also celebrating 50 years is “Chitty Chitty Bang Bang” by Ian Fleming.  It has also been so much of our lives for so many years that we think it has always been around.. However for many people their memory is of the Lionel Jeffries and Dick van Dyke film, rather than the book itself.  I can remember seeing the actual car parked outside the cinema in Weston-super-mare, publicising the film showing; happy days! 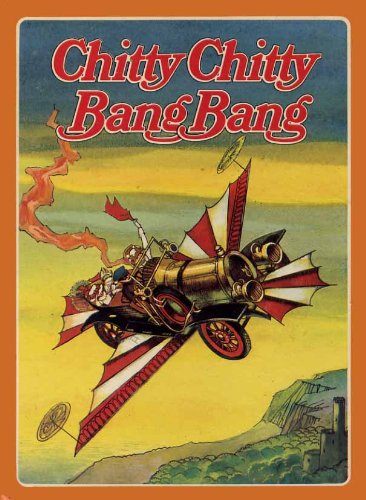 Other books published in 1964 which were very popular but are no longer so easy to find are “The book of three” by Lloyd Alexander and “Harriet the Spy” by Louise Fitzhugh.  I have to admit that I found these books when I started work in a library because as a teenager in the 1960s I had been transferred to the adult library and was discovering Georgette Heyer and Agatha Christie, as well as more intellectual writers.