I am currently having a calm and relaxing day after a 10 day session helping out at Bath.  I can only be in awe of John and Gill McLay and all the amazing work they put into putting the programme together and then being so totally hands on during the festival  I hope they are having a well deserved break, together with all the others who were there every day.  This year I managed to pace myself, although this meant that I occasionally missed out on events and despite my best attempts my ‘time turner’ does not actually function, so I cannot be in two places at the same time. 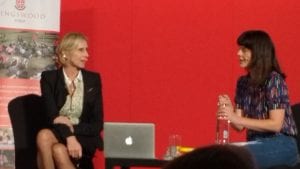 Events started off  on Friday 28th September with an event by the current Children’s Laureate, Lauren Child, in which she combined a general discussion about her books with talking about her new work “Hubert Horatio”.  It is based a round a character she created 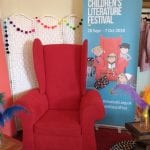 several years ago in a picture book, but now he is appearing in a work for ‘middle grade’ readers.  Hubert Horatio is a very serious and extremely intelligent little boy; unfortunately he has two very frivolous and spendthrift parents, so it is lucky that they are millionaires and they have their son to keep them out of trouble.  This book is published on 18th October, so I look forward to reading it and then talking about it; it sounds as if it is going to be great fun. The evening was finished off with a launch party at Waterstones, where it was lovely to meet up with friends and authors. 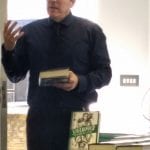 The festival began in earnest on the Saturday morning but because of other commitments, namely  a trip to London to hear Sebastien de Castell and Alexandra Christo and I was not able to start my stewarding until the Monday, but what a fantastic way to start.  The first event was with the so talented and charming Joseph Coelho, who is known for both his poetry and his picture books.  He focused on reading  “Luna Loves Library Day” and had the book on a large screen, so that the children could fully participate in the reading.  This is an absolute must for all parents to read to their children and for nurseries and schools to use as an introduction to visiting the library. It was also very appropriate as we have just had Libraries Week, where we hopefully celebrate the importance of these places in our lives.  The second event was the ever fabulous Sarah McIntyre and Philip Reeve 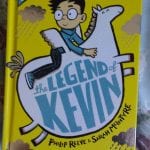 wowing the audience with the “Adventures of Kevin”, the story of a custard cream loving flying pony.  The duo are famous for their songs about the characters in their books and this was no exception.  we all came away with the ear-worm chorus going around our brains – “He’s the one, the one and only, roly poly flying pony” 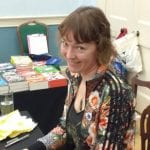 Tuesday saw me back in Bath for another round of sessions.  The first one was the delightful Chitra Soundar who I had the pleasure of hearing for the first time.  She is a writer and storyteller who captivated her audience with several of her stories.  the first was “Pattan’s Pumpkin“, an Indian version of a Flood story; she used slides of the pages to reinforce the images.  After this she told the story “You’re safe with me” which is about overcoming fear of the unknown, in the garb of a torrential tropical storm.  Although she did not read from the book, we were also able to see and purchase her new book “You’re snug with me”, the story of a polar bear and her two cubs as they survive winter.  I really have to mention her illustrator Poonam Mistry who has produced the most stunning illustrations for the last two titles.  The complexity of the style is really magical and I think that anyone, child or adult, could spend hours just looking at these wonderful pictures.  My morning was completed by the lovely M G Leonard talking about her trilogy “Battle of the Beetles“.  I was lucky enough to be able to take her out to a couple of schools when the first book “Beetle Boy” was issued, so I have always had a special interest in seeing her success.  Her audience of over 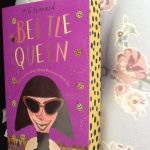 200 pupils were absolutely fascinated by her pictures of beetles and understanding the importance of these creatures to our world.  Whilst I am not sure I will ever want to get ‘up close and personal’ with beetles, I do have a greater understanding of their importance.  However the most important thing about these books is that they are really great adventures with a truly evil villain and some fantastic heroes, both human and animal, so I thoroughly recommend them for KS2 pupils and beyond. 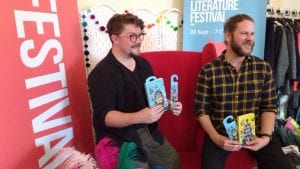 I actually managed to take a break on Wednesday and Thursday but on Friday I once again found myself driving over to Bath for an early start.  the first event was one that my grandson would have absolutely loved as it was about some of his favourite books.  The adventures of “Supertato” are loved by millions of small people and the 340+ who were in the Guildhall were certainly very vocal in their appreciation of the creators, Sue Hendra and Paul Linnet.  It was totally amazing how these youngsters became so involved in the adventures of vegetables in a supermarket but it also shows the power of the imagination and the pleasure that children get from listening to stories.  The final session of the morning was for a slightly older audience and  was about “The Nothing to see here Hotel” and its follow up “You ain’t see nothing Yeti!”  These are written and illustrated by Steven Butler and Steve Lenton and are hysterically funny adventures in a hotel for non-human guests.  So you are likely to meet ogres, trolls, elves, goblins and all sorts of wonderful creatures, but it is never quiet and adventures are always waiting to happen.  The two ‘Steves’ (not the original version, that was Steve Barlow and Steve Skidmore) are also great entertainers, so we had a truly funny and fascinating event.  They worked brilliantly with their audience and would be an excellent choice to invite into schools. 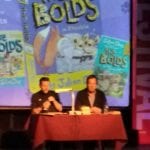 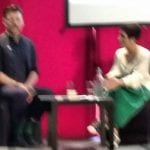 The final day of the festival was the Sunday and I had a double whammy of David Roberts,  but the morning started out with a show dedicated to the hero that is “The Gruffalo”.  This consisted of a partial retelling of the story, using musical instruments to represent the different animals and the forest was created with children, holding  small branches with leaves.  As a finale the Gruffalo made a visit and it was wonderful to see how many wanted their photos taken with this icon of children’s literature.  The first David Robert’s event was about the amazing “Suffragette”, which has really caused quite a stir in this centenary year since the first women in the UK got the vote.  The information is well researched and accurate as David has been fascinated by the subject since he was a child.  The illustrations are superb and use the palette of colours that we often associate with the suffrage movements.  This was an event that attracted a wide audience, many of them adults, which was great to see, but there were also numbers of younger readers who are fascinated by the history that this depicts.  Later that day I went down to another venue called Komedia, where David and Julian Clary were talking about “The Bolds in Trouble“,  the latest of their books featuring the incredible Bold family, a family of hyenas living as humans in suburban Teddington. I am a complete fan of these books because the whole concept is so ridiculous,  The characters are a sublime combination of animal and human traits and the books are full of subversive humour.

Looking back on this wonderful week I can only be thankful for having the opportunity to be involved with some amazing people.  The children who attended with their schools during the week have an incredible experience and their enthusiasm for books and reading will have benefited from seeing the artists at work.  I can’t believe that next year will be the 13th festival, but I am really looking forward to seeing what is in store for all of us.