In my role as chair of the SLA Information Book Awards I have the immense privilege to see an amazing collection of books every year.  However, I am also aware that many people do not have access to many of these books, or even 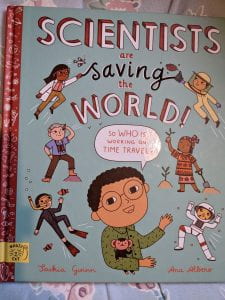 information on how to find them.  That is why National Non-fiction November is so valuable and we should all be very grateful to the Federation of Children’s Book Groups, for all of the work they do in promoting this event.

The title I am looking at today is aimed at young children and gives them a fascinating insight into the wide variety of work undertaken by scientists.  I suspect that even as adults, we will discover work that is new to us; have you ever 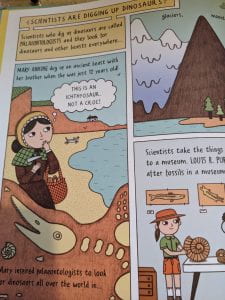 heard of an Acoustic Biologist before?  The book is laid out in a very clear way, with each profession getting a double page spread.  The book is based on the idea of a child asking their parent about scientists and what they do, with the mother then talking through a wide range of subjects that are being studied today. The illustrations are in variably sized boxes ( as with graphic novels and comics), so that it is easy to follow and most children will be familiar with the format.  The illustrations are brightly coloured and almost cartoon like in their simplicity, but this makes it easy for the very young reader to understand what is going on.  The text is also very simple and whilst many children will read this with an adult, it is also suitable for them to read for themselves, especially with the support of the graphics. 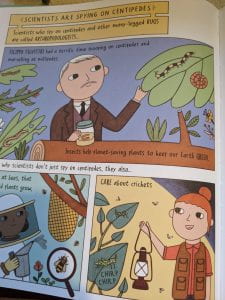 lived at different periods in our history.  There are many that I have not heard of before, as well as some that have become more prominent in the last few years; thanks to the growth of biographies in the children’s book world.  People like David Attenborough are world famous, but I was happy to see another scientist that I became aware of as a child.  At the end of the 1950s, before Jacques Cousteau came on the scene , we were introduced to the wonders of the ocean by the divers, Hans and Lotte Hass, so it is lovely to see a mention of Hans in this book.  For the young readers reading and listening to the content of this book, these details can act as a springboard towards discovering  more about these, often pioneering, scientists.

Because the book is aimed at a young audience, it does not include the usual elements to be found in information books.  So, we do not have a contents, index or glossary; however the inclusion of the list of scientists is very helpful.  For those in the Foundation stage and KS1, who are introducing children to the world of science, this is a brilliant book to get them excited about the world and what they might choose to do in the future.

Thank you to the Federation of Children’s Book groups for asking me to review the book and also to the publisher ‘Magic Cat‘ for providing a review copy.

I have been asked to review this wonderful book for two main reasons; firstly to celebrate National Non-fiction 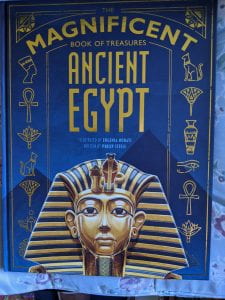 November and secondly to commemorate the centenary of the discovery of Tutankhamun’s tomb by Howard Carter and Lord Caernarvon.  Of course I was absolutely delighted to do so, mainly because I love Ancient Egypt and as a child in the 1960s I had ambitions to be an Egyptologist.  This year also sees the bicentenary of Champollion’s first work which opened a window on how we understand hieroglyphs, so all told this is a  very important year for understanding and celebrating the wonder that is Egypt.  This led to an explosion in interest from museums and collectors in Europe and then the USA  What this really shows is how items have been transported across the world in the last two hundred years, finding homes from the USA to Europe, but also thankfully being cared for in Egypt itself. The new Grand Egyptian Museum in Cairo is scheduled to open in November 2022, to coincide with the centenary commemoration.  It will be the largest archaeological museum in the world and I would love to go back to Egypt and visit it.

This glorious book is aimed at younger audiences, but also works as a starting point for children in KS2 and beyond.  The text is shown as bullet points and there is a small ‘fact file’ for each item; this shows where it was discovered and where it can be seen today.  However, it is the illustrations that are the star of the show; the illustrator has given us images of such wonderful complexity and detail that we feel that we are in the presence of the real objects.  Importantly though, we are able to see the fine detail and appreciate the skill of the crafts people who worked on these treasures over 3000 years ago in many cases. 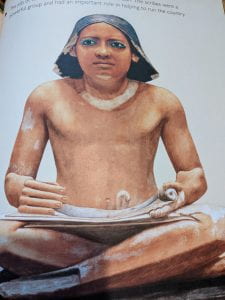 many of the images date from that dynasty and the following one, there are also beautiful artifacts from 800 years earlier and also much later.  One of the objects that I am particularly fond of is a small statue of a seated scribe, which although it is nearly 4500 years old is stunningly modeled and gives a feeling of great calm and character.  It seems strange that whilst  Egyptian wall carvings and paintings appear very flat, the sculptures are far more lifelike, even at this early stage of the civilization. 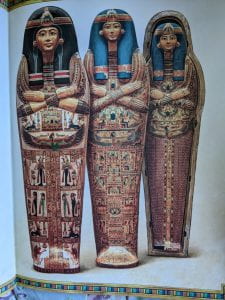 Another set of images that are really stunning are the set of three inter-stacking coffins for a princess Henettawy.  She lived about 400 years after Tutankhamun and as a member of the royal family she served as an important priestess of Amun-Ra.  In order to find out more about this lady, I visited the website of the Metropolitan Museum of Art at https://www.metmuseum.org/art/collection/search/548264

It was fascinating to discover that she was only 21 years old when she died, perhaps not that surprising given the health risks that people faced, but as a priestess she would have had a better diet and living conditions that most of the population.

The final image that I have decided to show, is one of the most famous items from the tomb of Tutankhamun and I 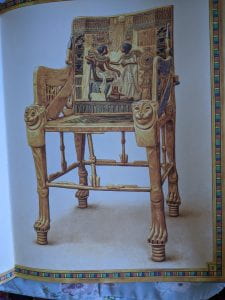 am happy to say that I have actually seen it when we visited Egypt in the early 1990s.  The throne of Tutankhamun is absolutely exquisite from all angles; however, it is the back rest that really draws everyone’s’ attention.  The image of the young pharaoh and his wife is so beautifully portrayed, with a real sense of the close relationship that they appeared to have.  Whilst this type of imagery became quite normal during the reign of  his father Akhenaten, it is far less formal than is usually found in most Egyptian art work and definitely when portraying royalty.

I hope that I have been able to give you a flavour of this book and the magnificent images that have been chosen to show the splendour that was Ancient Egypt.  Studying this civilization is still part of the primary curriculum and every school will have a collection of books and other materials, to help the children understand what life was like.  This book is a  five star addition to any school library or classroom and I really do recommend it.

Thank you to the Federation of Children’s Book Groups (FCBG) for asking me to take part in the events this month and also to the publisher WeldonOwen for providing a copy of the book for review.