I know autumn has arrived when children’s authors and illustrators of all kinds descend on the city of Bath.  This year sees the 7th Children’s Literature Festival and the first to have David Almond as the artistic director.

As someone who has been lucky enough to have been involved in the festival since its very inception I have seen it grow into one of the pre-eminent literary festivals in this country.  The passion and commitment that John and Gill McLay brought to  making their creation such a success has laid the foundations for something that will enthuse and bring enjoyment to children for many years to come.

Friday was the start of the proceedings.  I was lucky enough to be able to take Cressida Cowell out to one of the local schools, where she spoke to about 200 students about her books on “How to train your Dragon”  This was then followed by a panel discussion in the evening; this had David Almond talking to Cressida, Julia Green and Gill Trueman (school Librarian) about the importance of books for children and how they see their role in the whole process.  The evening was then completed by a reception for those who are involved in supporting the festival in a multitude of ways, but especially the volunteer stewards who work so hard every year ( a bit of self praise here!!)

The coming week will see the announcement of the “Information Book awards”, by the School Library Association, a full day conference on “Children as readers” on Tuesday and lots of further events for schools and families.  Then we have the grand finale next week end with brilliant authors, including Patrick Ness, taking part.

I think it is wonderful that children have the opportunity to listen and meet so many of the people  who write the books they love to read.  They really enjoy being able to talk about the stories, which characters they like and what story lines they would like to see.  Jim Smith, the author of the “Barry Loser” series of books had a really enthusiastic queue of boys wanting to have books signed and to talk about the series; who says boys don’t read.  There are many who do and others who just need someone knowledgeable and enthusiastic to find the right book for them. 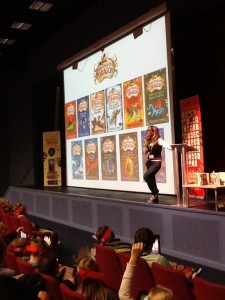 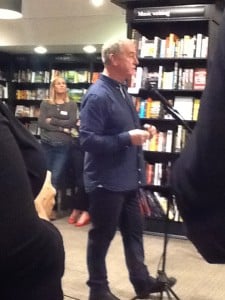 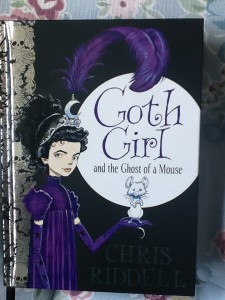 What is there to say about this latest offering from Christ Riddell other than it is absolutely brilliant.

Aimed at his younger readers it is the story of Ada Goth, daughter of Lord Goth, and her encounter with the ghost of a mouse;  “call me Ishmael” he says. Just this phrase lets you know that you are in for some serious brain teasing.  the book is full of allusions to other writers and stories in literary history and for the adult readers at least there is tremendous fun in seeing how many you can work out.  For the younger intended readers it is a story full of adventure, weird creatures and lots of fun.  The illustrations are superb, totally reflecting the characters and story line.  They are full of exuberance and really add an extra dimension to the story.  As for the production values; the book is a thing of beauty.  The purple metallic edging, the silver on the cover and endpapers, and the black ribbon bookmark are a throwback to the period that the book is set in.  It is a book to treasure and a story to re-read and re-tell .

September is almost over and the school year has really got going. It has also seen the publication of a truly amazing number of books by so many of our best loved authors.  I have also had the great pleasure to attend several book events, including one by Philip Reeve and Sarah McIntyre; the photos only tell half the story.  There was also news from Andersen books about their upcoming books for the new year and the events to celebrate Elmer’s 25th birthday – totally incredible.  We had a great afternoon last Monday in Bath, with Charlie Higson talking to over 400 students from 6 schools.  Luckily the event was over when the fire alarm went off, due to an electrical fault and four fire engines descended on the school.

This coming Friday sees the start of the Bath Kids Lit festival and I have the pleasure of taking Cressida Cowell to a local school, before the opening talk with her and David Almond.  It is going to be an action packed week with events by Alan Gibbons and Andy Seed in Bristol, followed a few days later by events for William Hussey.  Somewhere in here I will get on with reading books and will be posting some reviews, the next will be Chris Riddell’s “Goth Girl”. 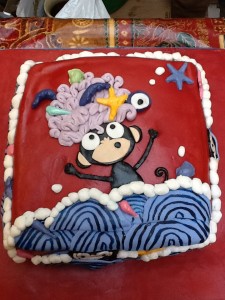 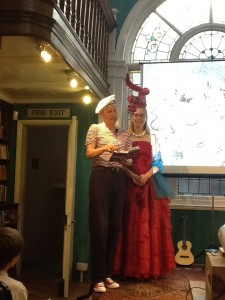 What an amazing new story from Philip Reeve and with illustrations by the fabulously understated Sarah McIntyre. This is aimed at younger readers of about 7+ and is a magical tale of Oliver, who goes in search of his parents, who have been kidnapped by the rambling isle which had appeared near their home, and which had then floated off with them. The story is full of amazing characters such as a short sighted mermaid, an island called Cliff! and a very grumpy albatross. It is totally whacky and will really appeal to young readers, and even those of us who are less young.

Thanks to the publisher for the proof. 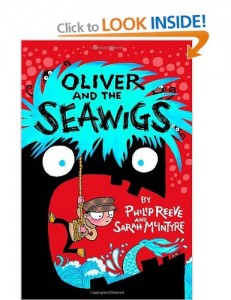 Philip Reeve and Oliver and the Seawigs Sarah McIntyre