This is turning out to be a bumper year for titles about Christmas and the winter season. Not only have we got a collection of additions to already popular titles, but we also have a huge range of new characters to bring us Christmas Cheer. 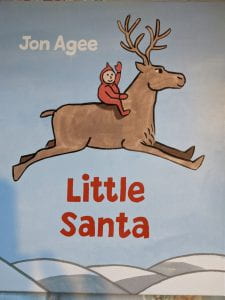 “Little Santa” by Jon Agee  is a delightful take on how Santa became the focus of Christmas that he has become.  It is about doing what is right for you, rather than just following everyone else; a great addition to the Christmas collection.

Little Bear and the Silver Star by Jane 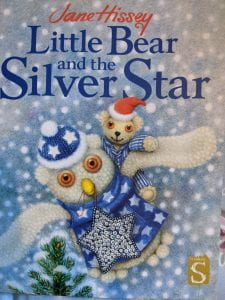 Hissey is a look at her famous collection of toys as they start to decorate the tree for Christmas.  When the star for the top cannot be found, Little Bear gets worried.  A midnight visit to the attic eventually finds the hidden glittery star, but then he loses it in the snow outside.  However, with a bit of Christmas magic, the tree eventually has its crowning glory! 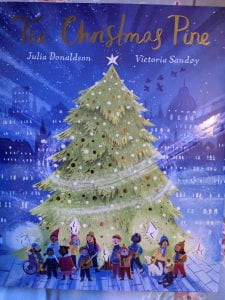 The Christmas Pine by Julia Donaldson and Victoria Sandoy  is a magical look at what happens to a small Norwegian pine tree as it grows into a tall and strong tree.  It is brought to another country and city (London), where it is the centre of celebrations and helps people remember the true meaning of the festivities.  This is the story of the Trafalgar Square tree that is gifted by the Norwegian people, in thanks for the help they received in WW2. 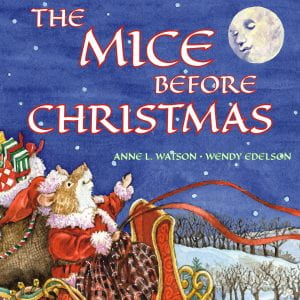 on the classic story by Clement Clark Moore, however this is about how the mice prepare and spend Christmas.  It is a bright and vibrant story of family and friendship and the joy of the festive season.  There are echoes of the Brambly Hedge stories and you can see this especially in the highly detailed and energetic illustrations.  This is definitely one that should be a classic read. 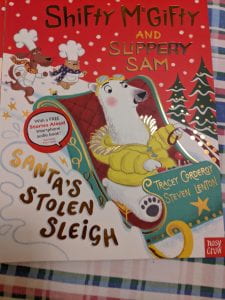 “Santa’s Stolen Sleigh” (Shifty McGifty and Slippery Sam by Tracey Corderoy and Steven Lenton  sees our two heroes, Shifty McGifty and Slippery Sam back in action.  When Santa’s elves become ill, a polar bear called Flo offers to help with toy making, but then she steals Santa’s sleigh, so she can have a ride.  Luckily things turnout well in the end and Flo is very remorseful.

“Grace and the Christmas Angel” by Lucinda Riley, Harry Whittaker and 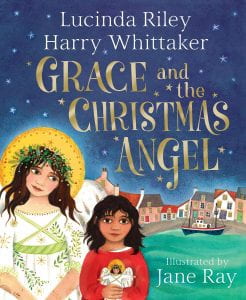 Jane Ray is a beautiful and timeless story of Christmas, family and the sense of community that is found in fishing villages around the world.  When Grace’s father does not get home for her Christmas concert she worries about his boat, out in a tempestuous sea.  Luckily she has a guardian angel, called Hope, who answers the call and guides the vessels back to port. The illustrations are yet another triumph form the magical Jane Ray and they really add to the joy in te book. 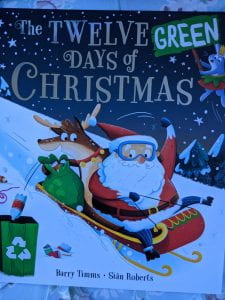 Christmas, however this time it has Santa as the main character and looks at what he sees when he is flying with his reindeer.  The theme is about caring for our planet and being more green about the way we behave.  It is a great and humorous story but with a strong eco message. 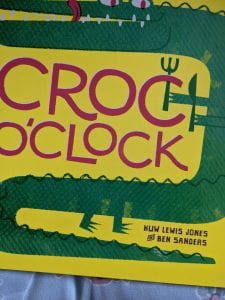 Christmas, but mixed with the Very Hungry Caterpillar.  Feeding time at the zoo is exciting as Croc gets increasingly larger meals, until he finally is ready to burst, but of course he doesn’t and his keepers put him on  vegetarian diet for a while. 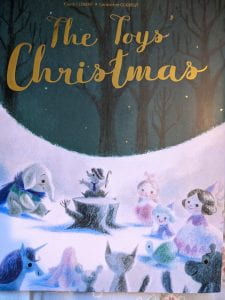 elephant called FanFan.  when the latter can’t be found on Christmas Eve, Noah is worried and finding it hard to go to sleep.  But FanFan is on his annual secret mission, together with lots of other toys; they meet up with Santa and let him know what their child would like for Christmas.  This means that everyone gets a present that they wanted and of course on Christmas morning Noah finds his faithful friend is safely home.

“The Christmas Pig” by J K Rowling and Jim Field.  This is a delightful Christmas story from one of the world’s 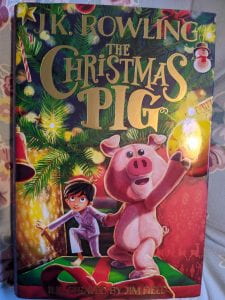 best known children’s authors.  When Jack’s favourite toy Dur Pig (DP) is thrown out of a car window, he is distraught and even a replacement pig does not help.  This is a totally magical story of lost toys and the love that a child has for a favourite toy.  It is also a story about families, as Jack’s dad has gone and his mum is just beginning a new relationship; however, the daughter of the new friend is not happy and she is the one who threw DP out of the car.  The twin elements of the story are all about accepting change and understanding that there can be new loves, even though you never forget the old.

“Diary of a Christmas Elf” by Ben Miller  tells the story of a young Elf called Tog, who really wants to become one 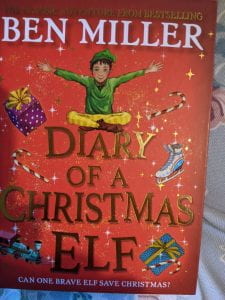 of the toy-makers for Father Christmas.  When things start going wrong and toys are being stolen, can Tog do anything to help solve the mystery, with the help of Santa’s daughter Holly?  This is a great read for the 7-9 age group and will definitely bring on the Christmas spirit. 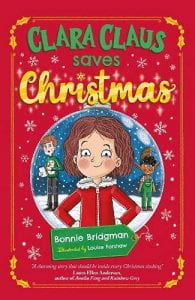 Christmas, it is up to his children, but especially his daughter Clara, to try and save the day, by making sure all the presents are delivered.  This is a delightful and very funny story for the young confident reader 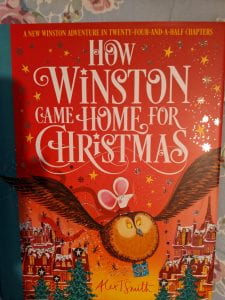 “How Winston came home for Christmas” by Alex T Smith is the gorgeous follow up to the star |Christmas book from last year.  Once again we have the story told in 24 chapters, so that you can read one for every day of Advent.  This time, Winston is on the hunt for a missing mouse and has lots of adventures on the way.  The book is full of recipes, craft ideas and that magical something that we all want from a Christmas story.  A totally glorious read. 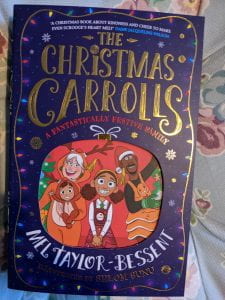 family who take their love of Christmas to the extreme.  They celebrate it throughout the year and can’t understand those who just celebrate in December.   When they move house and Holly starts at a new school, they find they are definitely meeting a lot of “Bah Humbug” feelings, so can they change people’s minds?  A brilliant look at what ‘being different’ can mean and how we can stay true to ourselves, whilst understanding the different views of others.

“The Christmasaurus and the Naughty List” by Tom Fletcher and Shane 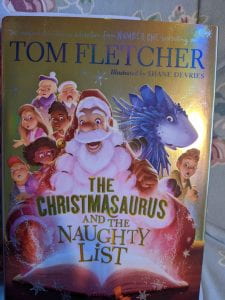 Devries  is the third adventure featuring this totally unique dinosaur and his friends.  When Santa does his annual weigh-in of the Naughty and Nice lists, he discovers that there are far too many children on the naughty list.  If not enough children receive presents then Christmas cannot take place, and that would be a disaster!  The Christmasaurus decides to intervene and get children moved from naughty to nice. 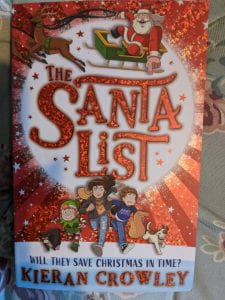 “The Santa List” by Kieran Crowley is another story about the naughty list.  |this time, the siblings, Aisling and Joe have been playing tricks on their new babysitter and she has sent a letter to Santa, putting them on the naughty list.  Can the children redeem themselves and get on the nice list; that is, if they can recover the list, which they have managed to lose!  A brilliant read for the festive season. 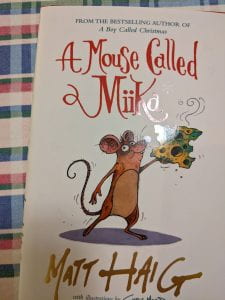 around “A Boy called Christmas”.  This time the hero is the small mouse, Miika,  who faces moral dilemmas when he wants to be friends with the only other mouse at the North Pole, but they are not as honest as he is, so eventually decisions have to be made.  With the release of the film version of “A Boy called Christmas“, this new story set in the same world is bound to be a hit.

“The Night train” by Matilda Woods and Penny Neville-Lee.  This is a magical 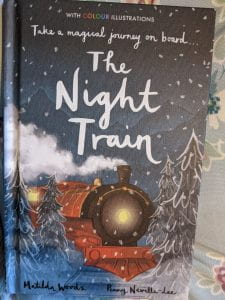 story that follows a group of characters as they board the night train, which will take them to a place where their dreams can come true.  However, they have to reach their destination by midnight, otherwise they will not dream;  unfortunately on this night there is an obstruction on the track and everyone has to work together to make things right.  It is a great story for younger readers, with lots of bright and atmospheric illustrations that bring the story alive. 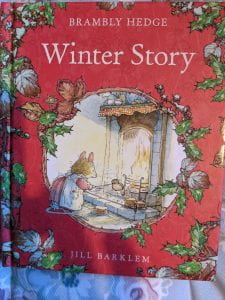 and the excitement of preparing for a ‘Snow Ball’.  The preparations are magical; from carving out a huge ballroom in the snow, to everyone baking and cooking a huge feast for everyone to share.  this gives a warm and cosy feel to the reader. 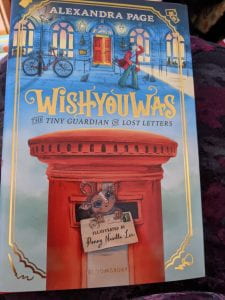 “Wishyouwas” by Alexandra Page.   It is the lead up to Christmas 1952 and Penny Black has been sent to stay with her Uncle Frank, who runs a small post office in central London.  Penny’s mother is a pilot for the Royal Mail and flies post to Europe and back; but Penny is hoping that she will be back home in time to celebrate Christmas.  What Penny does not expect, is to discover what she initially thinks is a rat, but turns out to be something very special indeed.  This small creature speaks English and says his name is ‘Wishyouwas’; he is a ‘Sorter’ and this group of creatures have made it their purpose to try and retrieve lost post and make sure it finds its rightful recipient.  However, the Sorters are under threat from the Royal Mail Rat Catcher and Penny finds herself trying to save them and prove how useful they would be to the service.  This is a wonderful story about friendship, family and also being open to new ideas and accepting others who are very different.  Alexandra Page has created a new Christmas classic and I know it will be a firm favourite for children and adults alike. 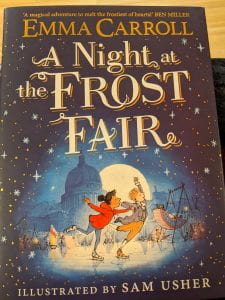 which the young Maya finds herself transported back to the Frost Fair of 1788, where she meets a young boy called Eddie.  She thinks he is being kidnapped, but finds that he has run away from home, because he is being treated as an invalid and not allowed any freedom.  How Maya helps him and also makes changes to lives in the present day, makes for a perfect Christmas tale.

“The very Merry Murder Club”, edited by Robin Stevens and Serena Patel is a 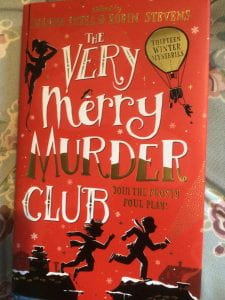 collection of murder and mystery stories, written by some of our most talented writers for Middle Grade readers.   The stories range from dead bodies to stolen treasures and each of them gives the reader opportunities to use their “little grey cells”.  This has kept me happily engrossed over several days waiting to collect someone in my car.