After the winter when travelling to and attending events is more difficult, I am now in summer mode when I try and go to as many launches  possible.

June started with a great session at Puffin to celebrate the launch of “Danger is Everywhere”, a collaboration between comedian David O’Doherty and illustrator Chris Judge.  The evening was hilarious as we were taught to avoid the dangers that are around us and we were all thrilled to go home with certificates to show we had reached level one as a dangerologist.

I have to say that the journey home was quite fraught with new found dangers, but I survived to go to other fantastic events.

an example of Chris’s work. 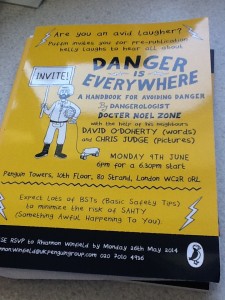 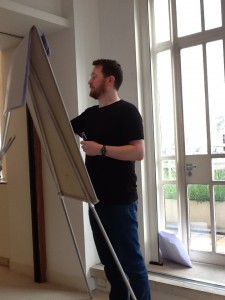 The artist at work

This is becoming a fantastic summer for all my Bath based author friends.  At the beginning of June we had the new book by Marie Louise Jensen.  It is called “Runaway and is a historical story of lost heirs, murder and secrets surrounding a grand house and its occupants.  There was a great launch at the Oldfield Bookshop, one of several independent bookshops in the city, which says something very positive about the people of Bath and it was good to catch up with friends and meet some new and fascinating people.

Then in July we have books by  Anna Wilson (Summer’s Shadow), Wendy Meddour (Wendy Quill series) and Jo Nadin (Eden), which I am really looking forward to reading, and hopefully congratulating the authors in person. 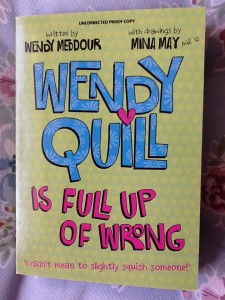 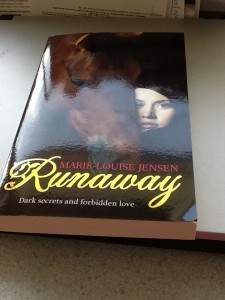 There will be more news after the events.