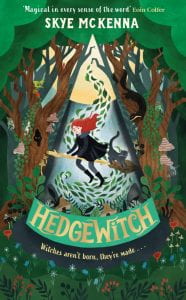 I admit to really loving books about magic, witches, and the mythology surrounding the Fae folk.  This belief in the fairy people has its roots in Celtic myths, as far as I know and you can forget any thoughts of pretty little fairies with tinsel and wings.  The characters in this story are human sized, powerful and have a very strong dislike for humans, although they have a fondness for young children and often kidnap them.  In the land of fae there are also creatures ranging from goblins to pookhas, all of which are a danger or at least an irritation to the human world.

Cassandra, or Cassie Morgan has been at the really awful Fowell House School for seven years, ever since her mother left her there at the age of five.  When she is told that her mother has been declared officially dead, she does not believe it and runs away, to avoid being sent to an orphanage.  But that is when things become very strange; firstly she is attacked by six very small men and then she is saved by a talking cat (yes, really!) and a flying broomstick.  The cat, Montague, tells Cassie that he has been sent by her unknown Aunt Miranda, to bring Cassie to the family home and when she arrives she discovers a world that she had dreamt about, but had not really believed existed.

Aunt Miranda is a witch, as are some of the locals in the village of Hedgely and her duty is to 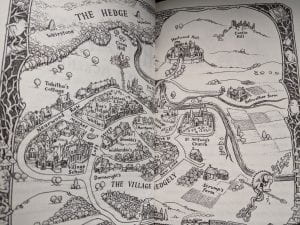 protect the ‘Hedge’, a dense wood that creates a barrier between the human and faery worlds.  It seems that creatures are trying to break through the barrier and they have been stealing children to take them back to sell to the ‘Lords and Ladies’ as the Fae are called.  Cassie finds that life has become very complicated; not only is she is starting lessons at the witch version of the girl guides, trying to navigate between several friends and getting to know her new family, but above all she is trying to find clues about her mother’s disappearance.  As you can see from the brilliant map, this is a small and tightly knit community, but it is still wonderful to be able to visualize it in this way.  There are also some marvellous illustrations throughout the book.

This is a truly fantastic story of witchcraft and magic, mixed with that slightly dark version of Celtic mythology.  Cassie is one of those characters that you can’t help but like, even though as an adult I find her very frustrating at times.   The friction between her and her aunt  is caused by the difference in the way they see the world.  Cassie, like many young people sees the world in fairly straightforward terms, unlike her aunt, who has learnt that there are all kinds of nuances and you often need to tread carefully.  Mixed with the search for the missing children and mother we also have multi-layers of friction between individuals and witch families.  You can see that there are echoes of other stories featuring young witches, but of course it is what the author does with the story that makes all the difference.  I first read this story in preparation for attending the Federation of Children’s Book groups’ Conference last month; as you can see from the photos, I had the pleasure of meeting Skye, as she launched her book with a selection of cakes.  I have now re-read the book ready for this blog and I am really delighted to say that the book is even better the second time around.  We are treated to adventure, intrigue, family and some fascinating characters, although I think that my favourite is that cat with attitude, Montague; he has that hint of sarcasm in his comments and yet we feel that he would do anything for the Morgan family.

This is one of those books that you give 10 out of 10, or even 5 stars, but if you bring it all to a basic level then this is a brilliant read and I can’t wait for the follow up, “WoodWitch” due to be published in April 2023.  It is a must have for any lover of fantasy stories.

Skye McKenna grew up in a mining town in the Australian outback. Surrounded by the red dust of 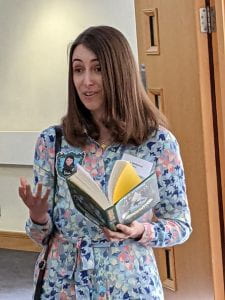 the Pilbara, she developed a healthy respect for wild things and wild places at a young age. Seeking
adventures of her own, she travelled to the UK and fell in love with the British countryside.
Skye now lives in Scotland and works for a heritage charity, with whom she recently curated an
exhibition on medieval magic. When she’s not reading and writing, she goes looking for stories in
the hills and forests of her new home. 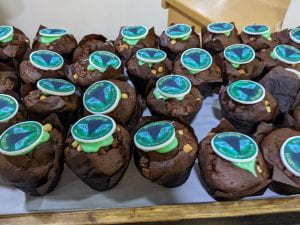