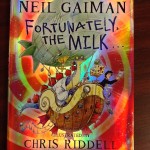 judging panel.  In 2010 we chose Neil Gaiman as the winner of the Carnegie for his book “The Graveyard Book”; the illustrator being Chris Riddell.  Since then this duo have collaborated on several other works including  “Fortunately the Milk”, a new edition of “Coraline” and “The Sleeper and the Spindle”, which has also been shortlisted for the Carnegie and was the winner of the Kate Greenaway medal for 2016. 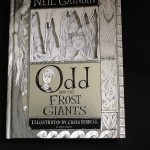 Last week I was lucky enough to attend an evening listening to Chris Riddell, at Bloomsbury Books.  He was discussing his collaboration with Neil Gaiman and specifically about their new offering “Odd and the Frost Giants”.  Chris was in discussion with Rebecca McNally, the publishing director at Bloomsbury and gave us a wonderful insight into how the creative relationship has developed over the years.  Originally Chris was asked to illustrate  “The Graveyard Book” for the English edition as the American version had been illustrated by David McKean and it was so successful that they have worked on a wide range of titles since then.

The new book is a stunning piece of art and a wonderful story based on the Norse myths.  Visually this is a book to treasure with a cut-out front cover and a positive wealth of stunning line drawings.  The underlying themes of the book seem to be about overcoming great adversity and about valuing the beauty that surrounds us. 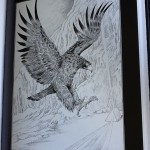 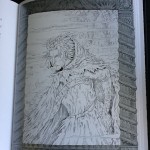 Chris Riddell also spoke about the role of librarians, both in libraries and in school libraries and how important they were in promoting books to children and teachers.  This message was very well received by the audience, most of whom were librarians from public and school venues. 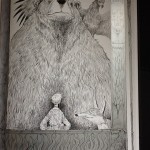 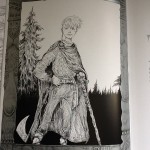 It was a great evening with an opportunity to hear our current Children’s Laureate speak and also to catch up with friends and colleagues.