December and January turned out to be good months for reading, despite the preparations for the holidays.  The towers of mince pies and sausage rolls are but a memory in the mouth, even if they still remain on the hips, oh well, I am sure it was worth it.

At the end of November 2012 we invited Simon Mayo to Bristol Central library to talk about his books.  There was an audience from 9 local schools and they had a really great time, especially with the experiments.  I have been lucky enough to see the new book “Itch rocks” and it is well worth a read, although it’s best to read the original title first.  My interest in chemistry has been rekindled and the Royal Institution lectures over the Christmas break went a long way to explaining about elements and their relationship with us.

I finally got around to reading “Four Children and it” by Jacqueline Wilson and it fired the intention to re-read the original by E. Nesbit.  A good fun read.  Terry Pratchett has also hit the spot with his new book “Dodger”.  Aimed at the teen market, but it will be a hit with younger readers as well.  It is a cross between a social history and a slightly distorted Dickens novel.  The inclusion of Dickens and Henry Mayhew adds that element of realism and there is plenty to shock and excite the reader.  This may well become my favourite Pratchett so far, and I love his other books.

Spring is also the time when we focus on book awards, with two local ones as well as the carnegie shortlist and the Red House Book Awards.  We have just celebrated the Concorde book award in South Gloucestershire, with Alexander Gordon Smith winning.  The ceremony was also attended by Mark Robson (a shortlisted author) and Joffre White who was the speaker for the afternoon. 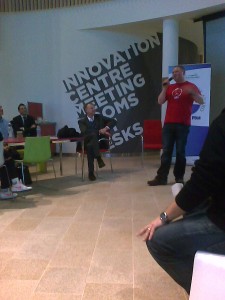