Most of us have been brought up listening to history, myths, legends and folk tales from other 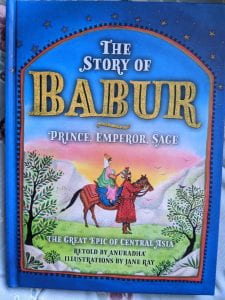 cultures.  But very often they can be from Greek, Roman, Egyptian, Caribbean or Chinese backgrounds.  So it is fascinating to have a story from a part of the world that we hear about in the news, but which we have little knowledge about their history; hopefully this book will help change that situation.

This is the story of the life of BABUR, who founded the Mughal Empire, at the same time that Henry VII and then Henry VIII were on the throne in England.  If we are aware of this dynasty it is because of the fifth Emperor,  Shah Jahan who was responsible for the building of the Taj Mahal, so it is fascinating to hear about the beginnings of this major dynasty.

The book is based on the autobiographical writings that Babur provided during his life and which he wrote between 1494 and 1530.  Originally the text was in a version of Turkish (Chagatay) but was then turned into Persian by the emperor Akbar.  The current author has had the job of greatly simplifying this work for a young audience; I believe that the original “Baburnama” is more than 400 pages, so this has been a mammoth task.

We start this tale in a part of the world that has changed names over the last centuries, so 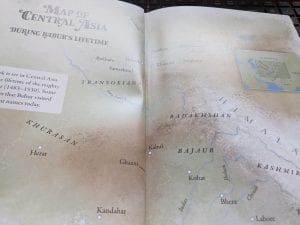 thankfully a map of the region has been included at the beginning of the story.  Basically we are looking at that area to the north and west of India and Pakistan, as we know them and which includes Uzbekistan and Afghanistan.  During the 16th Century this area was made up of a large number of small states, who were often at war with each other.  Babur was born as heir to the ruler of the state of Ferghana and at the age of 12 years he became king, after his father died in an accident.

The story is told in the first person as Babur reminisces about his life and the major events that took place.  It is noticeable that he spends a lot of his early life winning and losing territory; so that he is either a homeless wanderer, or the ruler of some important cities like Samarkand.  The memoirs see him gradually develop into someone who is more thoughtful and who  learns to understand the importance of wisdom when ruling a kingdom.  It is very evident that family was of great importance to him and he had a close relationship with his father and particularly with his grandmother; however it is with the birth of his eldest son that he discovered the happiest moment of his life.

This book is very highly illustrated by the artist Jane Ray and is full of her signature work, with 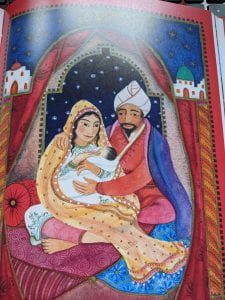 the use of gold and bright colours.  She has been nominated for many awards including the Kate Greenaway Medal and won the Smarties Award for her picture book “The Story of Creation” in 1992.  I have been a great fan of her work, which in this case is very similar to many Persian illustrations  The colours are jewel-like and there is a real sense of movement and action, particularly in those scenes that depict battles and journeys.  In contrast we have a delicate and quite tender scene as Babur meets his wife and baby son.

Babur is a character who is full of contradictions at times, but he had a profound effect on his part of the world, creating a dynasty that was to rule for nearly 300 years, of which the final 100 years were just a shadow of the earlier period.  In a time where we are even more aware of the need for diversity and understanding of  other traditions, this will make an excellent addition to any school library. 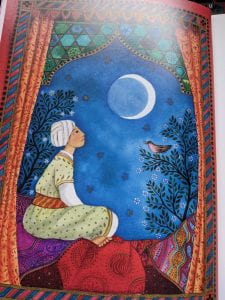