For the 11th year in a row my September has been highlighted by the BathKidsLitFest.  Every year I get this in the diary and know that I will be stewarding for some fantastic authors and illustrators over the 10 days of the Festival.  this time was no different and I managed to pack my diary with events over both weekends. 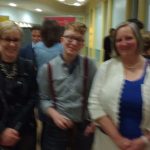 The festival started on the evening of 29th September when I found myself stewarding for a Cressida Cowell event at the Forum in Bath.  There must have been about 6-800 in the audience and as usual Cressida gave an amazing session, talking about both her “How to train your Dragon” series but also about her new book “The Wizards of Once”  The session was highlighted by photos drawings and clips from the latest dragon film.  All in all it was a great event and the audience were delighted.  The signing queue was long and must have lasted nearly 2 hours, which meant that I missed most of the launch party; luckily several of my friends were still there, so we were able to have a catch up chat.

Saturday started with the David Baddiel session, talking about his new book “Birthday 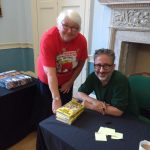 Boy” but also about some of his earlier works, like “The Person Controller” and “The Parent Agency”As he is a polished comedian and entertainer I was expecting a funny and well put together performance and I was not disappointed.  He spoke about his inspiration for the stories and really promoted the need for children to read for pleasure.  Once again he had a large and very attentive audience and it was good to see the mix of boys and girls, although especially good to see so many boys. 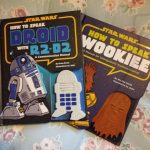 The next session was one for my grandson, or rather it will be at Christmas!  This event “Star Wars with JAKe” was aimed at a slightly younger age group, but really it was for anyone who loves Star Wars.  Of course with the new film coming out soon this was just the thing to whet people’s appetites.  JAKe is the illustrator of two small books called “How to speak Wookiee” and “How to speak Droid with R2-D2.  They are simple stories explaining about Wookies and Droids and giving insights into their respective languages.  Each page has a number and the book has a keypad, so that you can hear the sounds associated with that page by pressing the correct key.  Very interactive and great fun (but not necessarily for parents or grandparents!).  The children got the chance to draw a variety of characters from the films and some very lucky people got to take one of JAKe’s illustrations home.  It was a lovely family event that the audience really enjoyed. 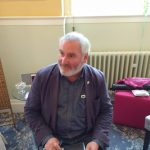 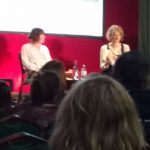 morning.  this was because I wanted to listen to two exciting and fascinating authors in conversation.  They are Emma Carroll, author of “Letters from the Lighthouse” and Eloise Williams who has just published her first book “Gaslight“.  The Session was described as “The History girls” and both authors have placed their books in the past, although in widely different places and times.  Emma has written about World War II although previously she has set her books in the Victorian period and this has enabled her to bring in a range of dangers and differing characters.  Eloise has set her book in Victorian Cardiff and has centred the story around a theatre and the docks, o there is again plenty of opportunity for mystery and villainy.  A really great time for all of those, especially young girls who love a great historical novel.  I was also lucky enough to meet Chris Riddell in the Green Room as he was preparing for his talk later in the day.  I know that the audience would have had a truly amazing time as he is such a brilliant speaker and artist.  We were so lucky to have him as a Children’s laureate and 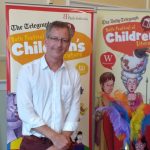 he is now an ambassador for Booktrust.  The day was further improved by seeing the lovely talented Martin Brown in the Green Room as he had just finished his event on illustrating the “Horrible Histories” series; his covers and ink sketches really are the icing on the cake as far as these books are concerned.  He has also just produced a book about unusual animals that I talked about in my post from the Federation of Children’s Book groups this year, absolutely brilliant.

Having had a few days off, Friday 6th saw me back in action stewarding for the Nadiya Hussain event.  She was promoting a book which mixed food and stories all linked in to the theme of Christmas, called “Bake me a Festive Story”.  She got several children to come on stage to help decorate gingerbread Christmas trees with green coconut and this was put on to large screens behind her.  There were also readings of at least one of the stories and it was a shame that they appeared to have been pre-recorded.  However the audience, both adults and children appeared to enjoy the event and were eager to get their hands on copies of her books. 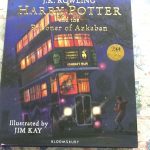 I stayed on at the Guildhall for the following event, which was the brilliant illustrator/artist Jim Kay, whose illustrated ‘HP and the Prisoner of Azkaban’ has just been released.  It is truly amazing how he has taken the world created by J K Rowling and has added depth and 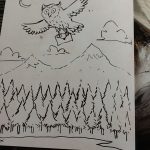 reality to an already beautifully realized world.  The insight that we were given into the whole process was enlightening and the fact that the illustrations for the first book took him over two years to produce had the audience  gasping.  When he went on to say that he had been given a deadline of eight months for the second book, it made most of us cringe at the concentration and focus that was required.  We were then treated to some amazing drafts for pages  from the current book and Jim talked through the process of how the final images evolved.  It really was a must see event for those who love Harry Potter as well as those who just love high quality illustration and imagination. 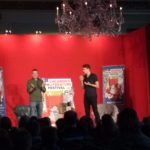 My Saturday morning was a mix of very different books, but I enjoyed both events because the speakers were so enthusiastic about their subject. The first event was about the book “Kid Normal“, written by Radio 1 DJs Greg James and Chris Smith.  The book is about a young boy who accidentally finds himself at a school for superheroes, despite having no superpowers.  I must admit that I enjoyed reading the book and am looking forward to the follow up which is coming out in March 2018.  The presenters were fun and very positive about children and reading; it was obvious that the audience really enjoyed the whole session  and that included the suspiciously large number of lone adults who attended. 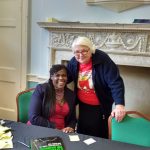 skies above our heads.  Maggie Aderin-Pocock, the well known and very charismatic astronomer, was talking about the new Doring Kindersley  book “Star Finder for beginners”.  She gave a fully illustrated talk, with some amazing images taken from various telescopes and satellites.  Her knowledge and enthusiasm is boundless and it was obvious that her young audience were just as keen on the subject.  I was surprised by the depth of questioning that they provided.  It was a real treat to see how engaged everyone was.  Those were my only sessions of the day but I was lucky enough to meet up with the lovely Tracey Corderoy and Steve Lenton in the Green Room after they had 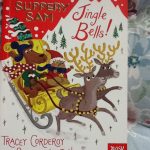 finished their event about the new “Shifty McGifty” stories.  These are great reads for those who are just gaining confidence in their reading,

On Sunday morning it was difficult to believe that this was the end of the festival.  We spend months looking forward to it and then it just goes in a flash.  My final day was spent at a different venue, the Widcombe Social Club, which although smaller than the Guildhall had a very friendly feel, as well as very good coffee from the bar. I was scheduled to steward on two events and they were ones that I was really looking forward to.  The first session was a discussion between Gill Lewis, author of “Sky Dancer” and Kieran Larwood who has written two books about the eponymous hero rabbit “Podkin One-Ear”  It was  a fascinating look at the difference in their styles of writing.  Gill very much keeps her 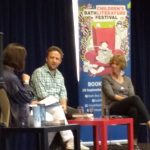 books grounded in the real world and the creatures are not humanized in any way, yet we 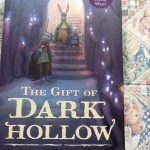 are able to make a connection with the animals and their worlds.  Kieran, on the other hand, has created a world that is inhabited by speaking, clothes wearing and almost human rabbits.  There is a mix of magic and fantasy but still they retain their link to the natural world they live in.  It was fascinating to hear both authors explain how they went about creating their stories and I would recommend that readers give both of them a try; they are well worth reading.

My final session was with one of my favourite authors for the MG (Middle Grade) reader.  Robin Stevens has made a 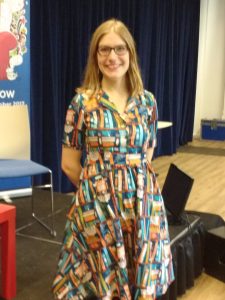 name for herself as the author of the “Murder Most Unladylike” series and all her fans are eagerly awaiting the sixth in the series, which will be published in the early spring.  I understand that she has already started writing number seven, so everyone is happy.  However at this event she was talking about something very different.She has been chosen to write the follow up to the “London Eye Mystery”by the late Siobhan Dowd.  Her book “The Guggenheim Mystery” has just been published and it was fascinating for the young readers to find out about the challenges of taking over the characters and plot conceived by such a loved author.  Whilst the main characters are the same as before, the story is set in the United States and this gives problems to the young hero and his friends as they do not understand the culture.  The fans were eager to ask questions and most stayed to have their book collections signed by the author.

The day was rounded off by saying hello to the lovely and brilliant writers Kevin Crossley- Holland and Francesca Simon who were preparing for their discussion about “Norse Myths”; a topic about which they are both very knowledgeable and enthusiastic about.  It is great to see how myths and legends seem to be coming back in to favour and there are so many great versions and variations that you can look out for.

Well that brings me to the end of my Bath for this year.  As always it was stimulating, educational and above all a very friendly festival.  I love the range of events and look forward to volunteering for my twelfth year in 2018. 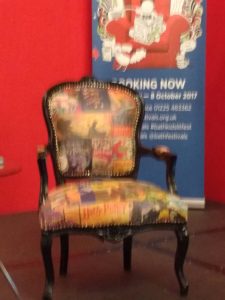