The past two years have had a profound effect on how we all interact with others.  For many adults it has been a 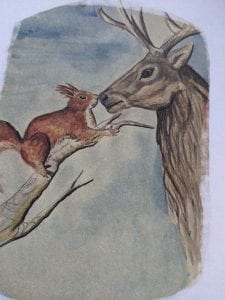 difficult time, but for children, whether very small or older, it has been even more difficult as they were only just beginning to learn how to integrate with other children; both at nursery and then at primary school.  For those ho are just that little bit older, it can be even more of an issue.  After all, they had just got used to school and having new friends and then suddenly they were cut off from this contact and often restricted to a very small space as well; those living in small flats would have had a particularly difficult time.  This charming little book follows Little Squirrel as he gradually learns to renew his contact with the world around him and finds that the other animals are friendly and caring and want to help him get used to the wood he lives in.

Thank you for Katie O’Donoghue for writing this introduction to her work and explaining the background to the story.  With her work as a child therapist she has first hand experience of the issues that young people face at times like this and hopefully her book will help many children cope with all of the changes they face.

“It’s time for Little Squirrel to start collecting acorns for winter, but he hasn’t left his tree since last autumn. He is 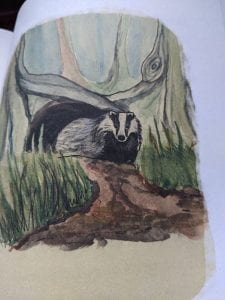 nervous about going outside again after such a long time tucked up in his nest. The more Little Squirrel thinks about venturing down to the forest floor, the more he worries about the unknown and what might be waiting for him….The past few years have certainly had an impact on everyone’s wellbeing and mental health, with research identifying that anxiety in children ages 3-17 have increased over the last five years.

The tale of “The Little Squirrel Who Worried“, introduces the reader to the world of a Little red Squirrel and 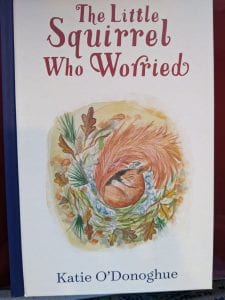 follows him on his adventures through the forest. As little squirrel encounters new friends on his journey we learn valuable strategies to equip us with skills that will benefit us our whole lives. We engage with anxiety psychoeducation*, helping the reader to understand anxiety what it is and how it can physically present. Distraction techniques that helps to take your mind off worried thoughts. Coping strategies, relaxation techniques and CBT** Thought challenging skills. These complex issues are told gently in a child like way and through the engagement of the characters in the forest that little squirrel meets. The tale invites the reader to meet Wren and Snuffly Hedgehog, Grey Rabbit to Mister Fox and from Old Badger to Great Stag. All these techniques can be useful in helping children manage any worried thoughts and feelings they may be having. It is the perfect book for a parent and child to sit down together and to use as a springboard for difficult conversation. Its also a great resource for teachers to use in the classroom to help children learn mindful techniques which can support them through the rest of their lives.

* psychoeducation –  learning about and understanding mental health and wellbeing

A timely story with a message that’s suitable for children and adults alike. As well as teaching coping strategies to help manage anxiety, it is a lovely way to help a child relax and regulate.  With the increase in children being impacted by anxiety and other mental health concerns and a demand in services, resources like The Little Squirrel Who Worried are needed to help families navigate the ways to best support children’s wellbeing.”

A favourite theme found in literature is that of an alternative world and in this country it very often centres around a world with a vastly different version of London.  If you like this type of fantasy, 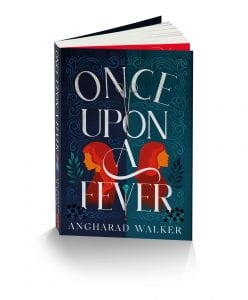 then you are really going to love this book.

This story centres around two sisters Payton and Ani Darke, who have moved to Lundain with their father, who works as a Methic (Doctor) at King Jude’s Hospital and their mother, who is a patient in the hospital.  They live in a world that is very different from our own because the country has been devastated by a mysterious fever that seems to affect people and their emotions; this has led to a view that all emotion should be suppressed.  There has also been a change in the way the country is governed and the power now lies with two large groups, the Bankers and the Methics, everyone else is subservient to them.

The two sisters discover that their lives are beginning to diverge and whilst Payton looks to science in the hope of finding a cure for her mother, Ani discovers that there might older and more natural ways to help those who are suffering.  As they both explore new paths they discover that  there are some good people in the world, but also that you can’t always trust those who you have looked up to in the past.  They learn the lesson that power can corrupt and that even those closest to us cannot always be trusted.

This is an absolutely brilliant teen novel from the author of “The Ash House“.  It is full of darkness and a lingering sense of evil that permeates the world in which the girls live.  The emphasis is very much on trying to remove emotions from those that have been struck down by the fever, because the illness is creating a wide range of disturbing symptoms in the patients.  It feels like a comment on the world that we live in and the way that mental health has been dealt with in the past; in fact the hospitals bear a close resemblance to the images we have of Victorian hospitals, with their dark spaces and rigid rules.  However, there is a glimmer of hope in the middle of this dystopian world, as Ani discovers when she is taken to Hyde gardens and meets the two remaining members of the ‘Wilders’ Guild.  These are people who are close to nature and understand that we need this link to the natural world and that it can bring a sense of peace, or at least tranquility to the troubled mind.

The author has created a truly frightening world, where disease has changed the way we all behave and has allowed small elites to take control of life.  There are definitely shadows of events that have, or could occur if we cannot deal with the pandemics that arise; we have all seen the rise in authoritarianism and the consequences if this is allowed to continue and take permanent control.  One of the really worrying elements of this are the quasi-scientific methods used by the Methics and the feeling that no one is trying to make any advances, despite the girls’ father supposedly researching a cure for their mother.

I have loved this book and the two main characters, who are each struggling to make sense of the world that they live in.  Many of the people they meet are also fighting against the dangers that they face and they find that together they are able to put up a stronger resistance to the powers that be.  Definitely a 5 stars from me, for this one.

“Angharad Walker grew up on military bases in the UK, Germany and Cyprus, where stories were often being told about far-flung places, past conflicts, and friends and family.

She studied English Literature & Creative Writing at the University of Warwick and the University of California Irvine. Her fiction has been published in Structo and A Million Ways, and her poetry has made it into Agenda broadsheets and Ink Sweat & Tears.

She lives in South London. When she’s not writing, she works as a communications consultant for charities and not-for-profits.”   Chicken House website.