When you see the name Maz Evans on the cover of a book, you know that it is going to be a brilliant, exciting 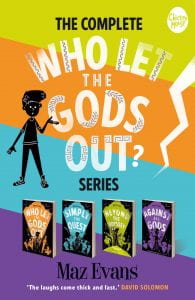 and extremely funny story.  The author has been thrilling us with her first series “Who Let the Gods Out” and I am sure that I was not the only person suffering from withdrawal symptoms when that series finished.  I need not have worried because she has come back with a complete ‘humdinger’ of a plot and a feisty and completely awesome heroine called Valentine Day (yes, really).

The plot introduces us to Valentine who wants to be a spy and follow in the footsteps of her mother, even though the latter denies that she has ever been an agent.  Her father is dead, according to her mum and it looks as if she is about to marry Vi’s teacher, Mr Sprout; providing Vi with  step-brother called Russell!  However at the wedding there is a problem, when the registrar turns out to be Vi’s father in disguise and he is also the world’s second most wanted super villain, his name is Robert Ford, aka Sir Charge (honest).  The plot begins to thicken as someone called Umbra wants to steal a mind control device in order to help them take over the world (you can almost hear the evil laugh can’t you?) and Vi is determined 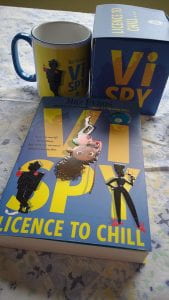 to stop them.  the problem is how will she achieve this and who can she trust to help her.  The world seems to be full of villains, recovering villains, spies and robowars aficionados. Vi also discovers that not only is her mum a retired spy but so is her grandmother and several generations before that; so it is no wonder that she has this need to investigate things. The plot moves at a tremendous pace and it really does need you to hang on to your hat as the action moves forward.

I think by now you will have been able to see the beautiful way that Maz Evans strews her plot with puns and jokes; so that if you are not laughing, you will probably be groaning.  However, despite all of this humour there is also the underlying look at more serious issues that we have come to know from the author’s previous work.  Both Vi and Russell are from families where the parents are no longer together and they are having to try and come to terms with the changes.  We also see that Russell in particular is subject to bullying at school; partially because his dad is a teacher but mainly because he is something of a science geek and is totally into robowars and has entered his robot ‘Agadoo’ for the Blitzbot competition.  This is a glorious story with the ability to make us all smile and laugh out loud in this difficult time.  I am so looking forward to reading more adventures with Vi and her new sidekick Russell.

Still unsure how it happened, Maz Evans is apparently the author of the bestselling WHO LET THE GODS OUT? series, which has sold to 19 countries worldwide and has received over 20 award nominations, including the Carnegie Medal, Branford Boase, Books Are My Bag and Waterstone’s Children’s Book of the Year. She narrates the audiobooks for the series and her acclaimed live events have featured at Hay, Imagine, Edinburgh, Bath, Cheltenham, Bestival, Wilderness and countless literary festivals and primary schools around the UK.

Maz has contributed to RETURN TO WONDERLAND, THE BOOK OF HOPES and SWALLOWED BY A 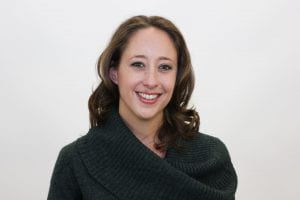 WHALE and her children’s poetry has been published in Caterpillar magazine. Her career began as a TV journalist, writing for The Daily Telegraph and TV Times magazine and she still regularly broadcasts her views on anything from politics to parenthood on BBC Radio 2 and the bus.

As a scriptwriter, her original musical H. R. HAITCH (with composer Luke Bateman) was produced at the Union Theatre, London in 2018. She has previously had shows produced at the Actors’ Church Covent Garden, Southend Palace Theatre and Bryanston Arts Centre and she was awarded places in the Holby City and Casualty BBC Shadow schemes.

As a songwriter, Maz won the Iris Theatre songwriting award three years in succession (with Luke Bateman) and her cabaret songs are regularly performed in the West End and beyond. As an author, she has won the hearts of thousands of children and as a nuclear physicist, she has frankly been completely rubbish.