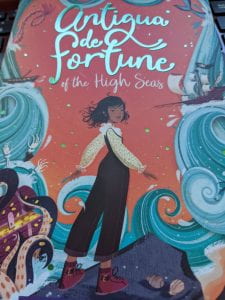 This is the second book about Pirates that I have had the pleasure of reading in the last few months.  this one is aimed at a slightly older audience, age 8 years and above and definitely makes it onto the reading list for “Talk like a Pirate” day.

Tiggy (short for Antigua) wants to lead a life of adventure and perhaps even be a pirate.  She wants to spend time down by the harbour with her friends Marina and Felipe, but unfortunately, she is a young lady and has to wear long dresses and even attend her first dance at the Governor’s Ball.

During the celebrations to commemorate the freeing of the town’s boys, based around  a legend about the ‘Pirate King’ who had taken all the boys and turned them into Sea Golems in the distant past, history seems to repeat itself.   A band of sinister pirates and a giant squid, attack the island and make off with all of the young boys, including Tiggy’s younger brother; she and her friends decide to try and free the captives.  Mysterious mental messages from a mermaid and the fact that Tiggy’s friend Marina is the daughter of a Selkie helps them in their quest.    Importantly,  how can this threat be defeated?

Although there is no real location for the island on which they live, the authors have very strongly given the setting a feel of the Caribbean, but with strong links to Spain, with the use of Madre and Padre  as well as some of the characters’ names.  They have created a world that we can associate with, but which has magical elements that weave a wonderful  and complex place.  You can absolutely feel the heat and hear the sounds of the busy Caribbean Port, together with the rich diversity of characters that are found there.

This is a roller coaster of a story in which the Swash has never before been so Buckled!  It is a fantastic story for the KS2 reader and gives the opportunity to explore themes such as identity, belonging, family, as well as folk tales and legends.  There are wonderfully strong characters, so that this book will appeal to both girls and boys.  It is also a great starting point for some very creative art and writing.  I definitely hope that we will see some more adventures for Antigua and her friends.  Thank you to Anna for this short post that she has given, sharing the background to the Selkie theme that is so important in the book.

An introduction to Selkies

One of the oceanic myths of particular interest to Oli and me was that of the selkie. Unlike the better known mermaid, who is permanently a human with a fish tail, the selkie is a shapeshifter, most commonly a woman who can exist as a seal in water, and then upon shedding her seal skin, change into a human form on land.

A main theme of our book was trying to reconnect landlubbers with the ocean, and promoting the synergy between land and sea, so the selkie seemed to encapsulate this theme perfectly — a person (or a seal) who could live in and enjoy both environments. Someone who values both habitats equally is far less likely to dump plastics in the waves and destroy marine life with pollution.

But it wasn’t just this that fascinated us, it was the dark feminist twist on the tale, something we weren’t aware of before we started our research. A common tale about Selkies is that should a man steal her selkie skin, he can make her his bride. Perhaps symbolic of the power, the identity and freedom, taken from women when they become a wife, especially in the olden days. Or perhaps even deeper, the power taken from women they are born into a patriarchal society.

It was therefore important to us that the Selkies in our story were strong women who kept hold of their seal skins. It is no coincidence that Gabriella, a well known Selkie and Mother to Antigua’s best friend, Marina, is a single Mother who has kept her powers. On the flip side, woman generally don’t give their power away, it is stolen by men, so it was equally important that the men in our book did not steal our Selkie’s skin.

That is not to say that all men steal women’s power, of course not, but Antigua de Fortune of the High Seas is a feminist book, with a strong female lead who rescues all the boys of her island, and we wanted this reflected in our mythology too. It was important to us that we invented a world where Selkies keep hold of their own skin, and men don’t attempt to steal it.

ANTIGUA DE FORTUNE OF THE HIGH SEAS by Anna Rainbow and Oli Hyatt is out now in paperback (£6.99, Chicken House) 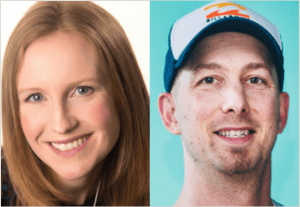 About Oli Hyatt & Anna Rainbow
ANNA RAINBOW grew up and still lives in North East England and works as a Clinical Psychologist with people with disabilities. Anna loves music and has always been in various choirs, singing quartets, bands, and orchestras. In 2015 she was shortlisted for the Times/Chicken House Children’s Fiction Competition which led to Chicken House publishing The Fandom, her series for young adults (as Anna Day) – it sold in 24 territories and was optioned for TV development by Fox. This is her debut middle-grade novel.  Find out more at annadaybooks.com and follow her on twitter @annadayauthor

OLI HYATT is based in Kings Sutton and is the co-founder of BAFTA award-winning animation studio Blue Zoo. He is also the Director of Alphablocks Limited, the company behind the popular CBeebies phonics shows, Alphablocks and Numberblocks. He is also the chair of Animation UK and was awarded an MBE for his services to the animation industry. This is Oli’s debut novel. Follow Oli on twitter @HyattOli

Antigua de Fortune of the High Seas is Oli and Anna’s first co-authored book together.