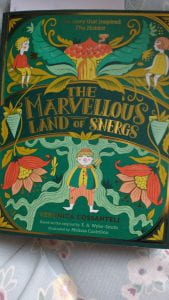 When you read that a book was instrumental in giving J R.R Tolkien the inspiration for his Hobbits, then it is time to get excited.  The plot of the story is similar to frameworks that we have become used to over the last decades.  The two main characters Pip and Flora are orphans and both find themselves living in a somewhat unusual orphanage.  The owner, Miss Watkyns, is strict but the children are well looked after.  However when a strange woman tries to kidnap Flora, the two children decide to run away and hide.  They then accidentally pass through a magical door and find themselves in the land of the Snergs; these are small rather round individuals who have a love of eating cake and other sweet things.   Our first introduction to these characters is through the person of Gorbo, who ends up being central to the whole story and  helps the children navigate the strange world they find themselves in.  The children soon discover that Flora is the target of a rather nasty witch called Mrs Meldrum, but the reason for this is unclear; however she turns out to be the same person who had tried to kidnap Flora at the beginning of the story. How they solve the mystery and save themselves and others from a terrible fate makes for a really tremendous adventure.

This is a story that can be read by confident readers from 7 years and up.  The text has a generous font size, which makes for easy reading and children will feel as if they are really achieving something as they read the book.  The story is divided into sections with a brief explanation show at the beginning and this then divides into several short chapters, which would be great for bedtime reading, or for reading in class.  The illustrations add to the charm of the book and have a delightful naivety that harks back to the period between the wars. 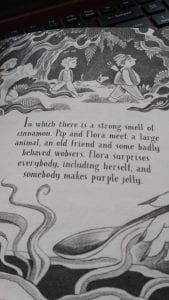 original version of the book is still in print and it is still possible to buy  both an audio and e-book version.  The original author would have appeared to be a bit of an adventurer in his youth but he started writing children’s books after World War I, perhaps as a respite from the horrors of war.  the original book has been written with a slightly older audience in mind and the text is much fuller, with quite long sections of description and explanation.  However it would be a great choice for avid readers who want to see how a story can have more than one way of being told.

I am delighted that this story has found a new audience for our modern times.  It was not a title that I had come across before but it does go to show that a good story remains just that, even if the writing style changes through time.

“Veronica grew up in Hampshire and Hong Kong with an assortment of animals, including an imaginary pet dinosaur who slept on her bed. She works in a primary school in Southampton, where she lives with three cats, two snakes, one guinea pig and a large number of lizards.

Her debut novel The Extincts is a wonderfully funny and charming adventure with more than a hint of Dahl.” thanks to the Chicken House website for this information.

Melissa is a freelance illustrator who works for a variety of publishers.  She studied at Cambridge School of Art and gained an MA in Children’s Book Illustration.  She still lives in Cambridge.