Every now and then you find a book that really hits the mark in terms of the plot and the characters you are presented with.  I was delighted to find that this book went beyond the high expectations that I had.  It really is a case of buckle up and prepare for the ride of your life. 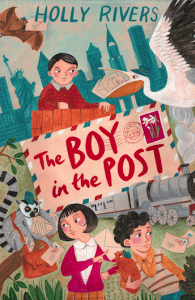 This is the story of three siblings who find themselves at the start of a grand adventure when they apply for a summer job at a local enterprise run by the quirky Grandy Brock and his assorted adopted children.  Grandy is an ex-postman, who lives in an old windmill, and is busily trying to train a wide range of animals to deliver the post;  he calls them the ‘animail’ and hopes they can be a fantastic addition to the postal service.  The three Shalloo children, called Orinthia, Seafra and Taber really want something to do in the summer holidays as their mother is always busy at work, selling high class motor cars; so when they realize this is not a joke, they jump at the chance to help train the animals and are soon looking after a Pelican called Geronimo and her youngster, Gungho. When Geronimo is sent off to New York on a test flight (to visit Grandy’s brother) everyone is really excited, but as the days and weeks pass, they become increasingly worried.  It is at this point that we begin to understand the title of this book;  yes, 6 year-old Taber (the youngest of the children) decides to hide out in a crate and have himself shipped to New York.  His siblings are totally horrified by this and decide that they will have to follow him. They take a very rare stamp from the local post office, put themselves in a crate for antiques and set off on their adventure.  However, as you can imagine, things do not turn out to be very simple and we get to join the children as they career from one situation to another,just managing to avoid capture thanks to some very helpful young people that they meet on their way.  We follow them through the streets of London, on the high seas aboard a Mail Ship and along the east coast of the USA, as passengers in a balloon. All of this time they are being chased by a very weird policeman and people who think that they are criminals.  The grand finale occurs in New York and there are some 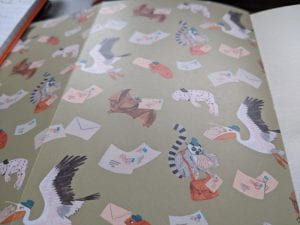 very surprising discoveries to be made.

I remember reading a while ago that a suffragette had posted herself to the Prime Minister as part of their campaign for women’s rights; in fact this happened in 1909 and officials at Downing Street declined to accept delivery of the’parcel’.  So when I had finished reading this gorgeous book, I decided to have a look online and was frankly amazed (!) by the sheer number of people who have attempted to travel by post. The vast majority seem to have had some success, but with modern courier firms limiting the weight of items, it is more difficult for people to travel in this way.

This story takes us on a real roller-coaster of a ride, both literally and metaphorically, as our heroes try and catch up with the very young Taber.  There are adventures on trains, boats and planes (well, a balloon anyway) as the children also try to evade the law and a very secretive villain.  It is a story about family and friendship; where non-traditional families share strong bonds and where friendships can be created when sharing danger and a fight against wrongdoers.  It is fantastic to discover a 5 star book so early in the year and I really hope that we might see the children having some further adventures in the future.

Holly grew up in a real-life children’s book, playing the part of Drusilla in ITV’s The Worst Witch alongside Felicity 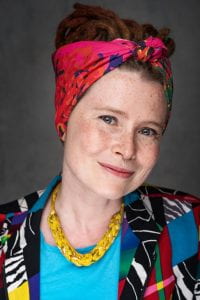 Jones. She spent her childhood in Wales, wishing that she was Pippi Longstocking, and after graduating spent time working as an actor, broadcaster and cheese-seller, until one day she had the idea to pen a story about a tenacious young inventor named Demelza. Holly’s days are now spent penning new stories as well as leading drama, craft and bushcraft classes for children. She lives in Brighton with her girlfriend and still wishes that she was Pippi Longstocking.  (from Chicken House website)