I know that this is a really odd title for a blog post but I think it reflects the sensation when children first discover that they can read longer books with pleasure and a certain degree of fluency.  It is like learning to walk, ride a bike or even to swim; there is a feeling of freedom and having some control over the environment in which you find yourself.  In other words it is a truly liberating experience which will stay with you for your whole life. 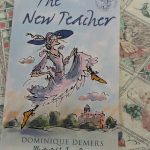 series of books by this French Canadian author and which was first published in 1994.  It is a short and very witty story about what happens when Miss Charlotte arrives to teach a class of young children who do not enjoy school.  Her somewhat eccentric methods eventually make her very popular, but the children find that they have to fight to keep the teacher they have come to love and admire.  As a follow on, you might like to read “The Mysterious Librarian” which sees Miss Charlotte take on the challenge of encouraging children to enjoy reading. 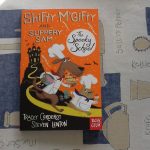 “The Spooky School” by Tracey Corderoy and Steve Lenton is another set of short stories about the cake-baking, crime-fighting duo of Shifty McGifty and Slippery Sam.  They originally started their adventures in picture book format but have now branched out for the next age group.  In this book they save jewels, fight ghosts and meet a fiendish new villain; a Red Panda called ‘Red Rocket’.  It is great fun.

Tamsyn Murray  has written “The Troublesome Tiger” as the second story 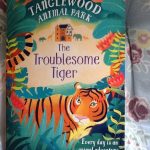 in the “Tanglewood Animal Park” series which follows the adventures of young Zoe, whose parents have bought Tanglewood Manor and turned it into an Animal Park.  This story revolves around Tindu the male Tiger and the attempts to help him settle down in the park, before the arrival of his new mate.  It is a charming story with a lot of information and a cast of characters that you can’t help but like.  This is a super series, especially if you are an animal lover.

“Captain Pug” by Laura James and Eglantine Ceulemans follows the 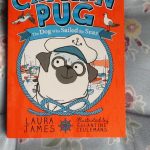 adventures of  young Lady Miranda and her dog called Pug as they visit the local boating lake.  However when things get out of control and Pug finds himself in the sea and being rescued by another young girl life becomes quite adventurous.  This is the first in a series of adventures for the pampered pooch and joins the list of books written about the breed. 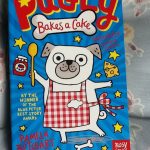 Pug related story only this time the hero is called Pugly and he is trying to bake a cake for his owner.  Unfortunately his efforts seem to be being sabotaged by Clementine (Clem) the family cat.  Most families with a mix of pets will understand the frictions between the main characters and the very funny scrapes that they get themselves in to. 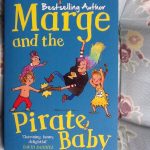 “Marge and the Pirate baby” by Isla Fisher is the second book featuring Marge, a truly unique babysitter. This time she is looking after Jemima and Jake as usual, but finds herself having to look after their demon of a baby cousin called Zara.  There are three short stories in this offering and I think that the author is really starting to be comfortable with her characters, which means that we become more involved with the stories.  This is a funny and quirky book for both boys and girls.

“HILO, the boy who crashed to earth” by Judd Winnick.  What do you do when you discover a boy that says he fell from the sky and does not know 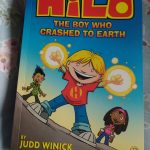 where he is from.  That is the situation that D.J and Gina find themselves in and they then have to try and find a way of sending him back home.  This book is the first in a series of comic style books being published by Puffin.  It is bright , well illustrated and full of humour; in other words it is great for boys in particular, although the strong female character makes it fun for everyone. 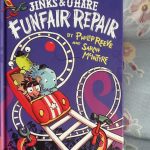 another one of their fantastically funny collaborations.  Set in Funfair Moon it is full of zany aliens, dastardly villains and a clever heroine called Emily.  As you would expect this will take you on a ‘roller coaster ride’ of excitement.  The illustrations are full of the energy and humour that we have come to expect.  It is a great book to read alone or to a class.

“The Bolds on Holiday” by Julian Clary and David Roberts.  Once again we enjoy the company of the Bolds, a family of hyenas who are living in 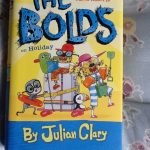 Teddington, disguised as humans.  This book sees them and their friends going to Cornwall on their summer holidays.  As usual there are lots of ‘groan worthy’ jokes as well as puns, both written and visual.  I love the way that the author’s voice comes across so easily and the illustrator’s ability to translate all of this visually.  A really great read for all ages.

“Rabbit and Bear” by Julian Gough and Jim Field is about the developing friendship of Bear and Rabbit.  Bear wakes up during winter as a thief stands 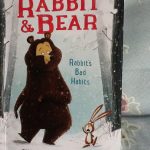 on his nose as they are leaving his cave; that is when he finds that all his food is missing.  He goes outside and discovers the wonder of the snow.  Rabbit offers him a moldy old carrot to eat, which he is very grateful for.  However he does not know that it is Rabbit who has stolen his food. When a wolf comes looking for some food the two friends have to work together and Rabbit in particular learns a few things about friendship.  What a funny story with some gross elements such as Rabbit eating his own poo (yuck!)

“A Race for Toad Hall” by Tom Moorhouse and Holly Swain is a wonderful update on  “The Wind in the Willows”.  When Teejay, Mo and Ratty find an old 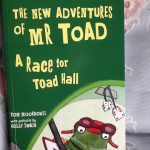 Toad frozen solid in the ice house, little did they guess that it was the (in)famous Toad that they had heard stories of from their grandparents. Toad of course is just as excitable as in the past and when he finds that the weasels have taken over Toad Hall and want to knock it down for a housing estate, he is determined to get it back.  With the help of his new young friends he finds a way to challenge the weasels.  This is a great story full of charm and humour that really retains the spirit of the original and this is captured by the super illustrations by Holly Swain.

I hope that you find some books here that you will enjoy reading, either to yourself or to some others.  All of the stories have the ability to make reading FUN, which is the best way to help children develop a love of reading for the rest of their lives

My first big gathering of this year and so many friends to catch up with.  I have now been back from the conference for two weeks and I am just coming down from the clouds.  It really was an amazing event.  As always the exhibition was full of children’s publishers showing us their latest wares and sharing their knowledge and enthusiasm.  It is always such a pleasure to meet up with these wonderful people and to come away with such goodies to read.

One of the things we love about children’s book conferences is the opportunity to meet and listen to so many stimulating and exciting speakers, both writers  and illustrators, as well as the amazing Kate Wilson of Nosy Crow books.  As always we were treated to a generous amount of cake over the weekend, washed down by cups of tea and coffee.

The weekend started with a truly inspirational talk about poetry by Sarah Crossan, the author of  “Weight of Water” and “Apple and rain”.  As small children we are totally surrounded by rhyme, from nursery rhymes to the work  of people such as Julia Donaldson and Lynley Dodd,but as we get older poetry is moved within a fence that many find difficult to overcome.  There are some authors who use rhyme in their novels but it is a concept that we need to get back to.  If we look at the history of storytelling we find that many of the major cultural tales are told in a poetic form; just like song lyrics,  which we find easier to remember.

Saturday morning started with a session on writing non-fiction, with a panel of Nicola Davies, Nicola Morgan and Marcia Williams in conversation with Zoe Toft.  All three authors have carved out a niche for themselves in this area and although they have very differing styles, they all appeal to their intended audiences.  Nicola Davies writes narrative non-fiction and approaches the task in the same way as writing fiction.  Nicola Morgan on the other hand feels that the two disciplines are very different and that over the years she has “lost the fiction muscles in her brain”.  Marcia Williams was enthused by a teacher who would read out loud to the class.  All three described how they had gradually developed their writing style and what influences had affected them.

The next session was with Tom Moorhouse who has written “The River Singers” and “The Rising”, about a family of water voles. Tom is a naturalist by profession and spoke about the reality of life for these animals as opposed to the images from books such as “Wind in the Willows”.  It was a fascinating talk and I know it will have made many new converts to his books.

The afternoon was taken up by the larger than life characters of Kjartan Poskitt, Philip Ardagh and Simon Mayle.  All three authors write humourous novels for primary age children, although Kjartan is renowned for the way that he brings maths alive to his audiences.  Our speaker at dinner was the amazing Frank Cottrell Boyce who was celebrating the launch of his latest book “The Astounding Broccoli  Boy” 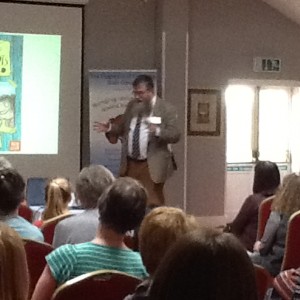 Sunday morning was another action packed session with a talk by Kate Wilson about Nosy Crow and how they have developed both their apps and the hard copy versions of the books.  It was great to hear that books are still a top priority, not least because they are such a variable size and format, whereas with technology you are limited by the size of the screen.  The other two sessions were an Illustrators’ panel with Rob Biddulph (Blown Away), Sophy Henn (Pom Pom gets the grumps) and David Shelton (A boy and a bear in a boat) and then a young adult panel with Non Pratt (Trouble),  Alice Oseman (Soliaire) and Lisa Williamson (The Art of being Normal).  We then finished off with discussions with Steven Butler and the really great Jonathan Stroud (Lockwood and Co.).

By this point were were all totally exhausted but very happy at having attended such a stimulating and very friendly conference.  I have  still only looked at the tip of the iceberg when it comes to the books I brought home, but I look forward to many hours of great reading.