The last couple of months have seen huge changes in my ability to see forthcoming titles.  First we had London Book Fair cancelled and then the wonderful Federation of Children’s Book groups Conference.  This month I should have been attending the School Library Association Conference, but that is now online.  All of this has meant that I could not meet up with the fabulous friends in publishing and look at the amazing books that they bring to the various exhibitions.  However  I will say thank you to the many publishers who have kept on sending review copies when requested, it is greatly appreciated.  It has also been great to keep up with those books that appear as e-galleys on Netgalley and Edelweiss, this means that I am able to still read and promote the books that I think everyone will enjoy.

I am starting off with this look at some titles for younger readers and I hope they will enjoy this small group of titles featuring ghouls, vampires and witches. 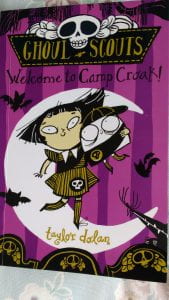 “Ghoul Scouts, Welcome to Camp Croak!” by Taylor Dolan is the first in a new series about Lexie Wild, who finds herself at a summer camp called ‘Camp Croak’, because her grandma took a wrong turning on the road.  Finding herself sharing a cabin with a ghost, a zombie and a werewolf definitely was not what she expected, but turned out to be great fun.  This is a fast and furious story of a truly evil teacher and how the girls foil a plot to take over and then sell the camp.  I loved the amazing illustrations, they are totally weird and wonderful. 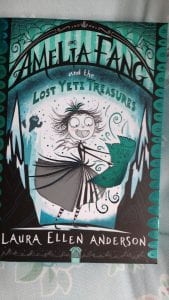 “Amelia Fang and the Lost Yeti Treasures” by Laura Ellen Anderson is the latest adventure of everyone’s favourite vampire and her assorted friends.  When they are all invited to the 350th birthday party of Florence the yeti’s great grandmother they did not anticipate that there would be a thief about, but finding the perpetrator and saving the Yeti mountain from collapsing will take all their ingenuity and see them facing great danger. 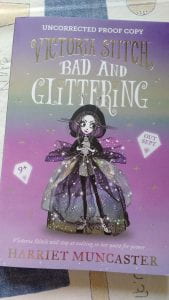 “Victoria Stitch, Bad and Glittering” by Harriet Muncaster is not due for publication until September but it brings us a new heroine from the author of the ‘Isadora Moon‘ series; in fact we get two for the price of one, because Victoria Stitch has a twin sister called Celestine.  Victoria thinks she should be in line of succession to the throne of Wiskling Wood but finds herself in all sorts of trouble, especially when a strange girl called Ursuline offers to help her.  This is a delightful story about two girls who discover that, in general, people are a mix of good and bad and they just need to have the right motivation.  the author has produced some wonderful illustrations that have a truly witchy and gothic feel. 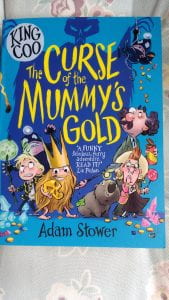 “King Coo, the Curse of the Mummy’s Gold” by Adam Stower  is the second adventure for young Ben Pole and the unlikely hero King Coo who lives in the woods near his house.  When an ancient treasure is stolen from the local museum Ben’s mother is under suspicion as she is a security guard; so it is up to Ben to try and find the real thieves and save the day.  Yet again we have a hysterical tale of intrigue and adventure, where the totally incredible King Coo helps in their own inimitable way.  This is definitely for those who love to laugh their way through their adventures. 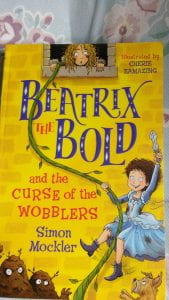 “Beatrix the Bold and the Curse of the Wobblers” by Simon Mockler introduces us to an exciting and feisty young heroine called Beatrix.  She has spent her life cooped up in a castle with her aunt and uncle, neither of whom seem the least bit interested in her.  She know that there is some mystery surrounding her but doesn’t know what, so eventually she decides to leave the castle and discover who she really is. Of course we have all guessed the secret well before Beatrix cottons on to being the QUEEN; the problem is her aunt rather enjoys running the country and Beatrix soon finds that she is in danger.  This is a funny fast paced and very enjoyable read for adventurous young people. 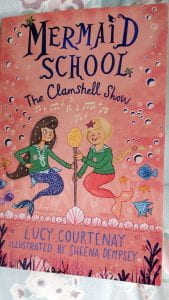 “Mermaid School, the Clamshell Show” by Lucy Courtney and Sheena Dempsey joins the surge of titles that have mermaids as their central characters.  this series is aimed at younger readers and centres around Marnie Blue and her two best friends as they get used to attending mermaid school.  This title tells us what happens when they are all auditioning to take part in a show, but then a new girl appears on the scene who wants the starring role by fair means or foul.  This is great fun and also is a good way to help young people understand the dynamics of school life. 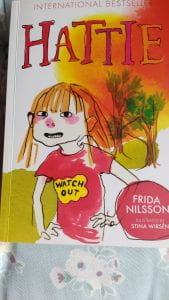 “Hattie” by Frida Nilsson and Stina Wirsen is the story of a young Swedish girl and her first year at school.  It shows a very different life from that in the UK but the challenges of finding friends and learning about the wider world seem to reflect issues found around the world.  This is a charming look at a young person just finding their feet as they start school. 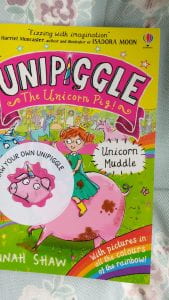 “Unipiggle, Unicorn Muddle” by Hannah Shaw tells the story of how Princess Pea (Peony) has to choose a unicorn to become the Royal Unicorn.  But Pea would rather be out playing and getting muddy instead of being dressed up in all her finery and sitting on a stage with her parents.  Things take a hilarious turn as a pig joins the parade of unicorns, but he also has a horn, and most importantly he seems to have a great sense of fun.  Of course Princess Pea decides that this creature, she calls the Unipiggle, has to become her companion.  What follows is a lot of humour and the beginning of a delightful relationship between the princess and her magical pig. 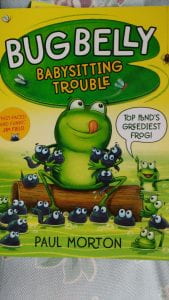 “Bug Belly, Babysitting Trouble” by Paul Morton is definitely a hilarious story for those just beginning to read alone.  The main character is a frog called Bug Belly, who is called upon to look after his large number of nephews and nieces (tadpoles and froglets) whilst their parents are off at a frogspawn conference.  The story follows his adventures as he tries to avoid numerous enemies whilst also moving the young offspring to a safer lower pool after he accidentally created a hole in the upper pond.  Not only is this a great adventure but it also enables young children to understand some of the dangers that frogs encounter.  There are  great illustrations and lots of fun. 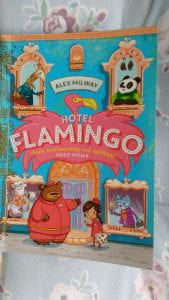 “Hotel Flamingo” by Alex Milway tells the story of young Anna Dupont who finds herself the owner of the Hotel Flamingo; unfortunately the hotel is rundown and the animals who are running it have run out of energy.  They are also facing competition from the hotel on the hill, called “The Glitz”  This is a great story about friendship, sharing and creating a sense of community.  There are some delightful characters and charming illustrations that bring the story alive. 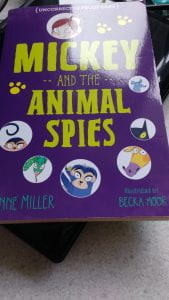 “Mickey and the animal spies” by Anne Miller is a fabulous story for those who like mystery, spies and some very unusual characters.  Mickey is a great fan of codes and spies and longs to follow in the footsteps of her hero Hildegarde L McTavish, so when she discovers a code taped to a bus window she just has to investigate.  Cracking the code leads her to a mysterious office where she discovers a spy unit  consisting of animals and called Cobra.  Further adventures follow as they try and save the pet of a famous pop star as well as preventing a jewel robbery.  This is an excellent first children’s book by the author and I was lucky enough to attend the book launch in London earlier in the year.

I do hope that you find some books in here that you would like to share with young readers.  At a time of such uncertainty it is good to have books that we can really enjoy and which take us away from the restrictions that we have to face.  I sincerely wish that we all have a happy and peaceful summer and that we can return to a new normal in the near future.