We live in a nation that is multi-ethnic and becoming even more so as the years go by.  It is therefore very important that we all have some understanding of the beliefs and histories of the various communities who share our small island.  As a librarian for a school library service, I was always aware of the need for books that reflect on the main religious and cultural groupings that are found in our schools.  Whilst there are some excellent books aimed at primary schools, both as information books and as re-tellings of myths and legends, this appears to be the first book that not only tells the  story of the Gita, but also explains so many of the names, events and thoughts that we read about in the book.  I am delighted that I have been asked to host this article by the author and I hope that this book will bring the characters alive to the intended audience.  Happy Diwali to everyone. 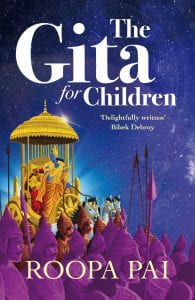 Why did you write The Gita for Children, and what age is it aimed at?

The first edition of The Gita for Children was published in 2015. If anyone had told me, even in early 2013, that I would write a book for children on this subject, I would have laughed. Uproariously. My book ‘What if the earth stopped spinning, and 24 other mysteries of science’ had just come out, and the last thing on my mind was a book that had anything to do with religion.

Soon after, I was brainstorming with my editor on the possible themes for my next book, when she suggested I try my hand at a retelling of the Bhagavad Gita, one of India’s ancient and revered texts, for children. Aghast, I staunchly refused to even consider it. Despite never having engaged seriously with the Gita, I believed the text was too abstract, too esoteric, too religious, probably sexist and casteist, somewhat irrelevant in the modern age, and certainly not for children.

But my editor, bless her heart, would not let it go. In the end, I decided it was fair that I read the text once, with some commitment, before I made my decision. What I discovered blew my mind.

Far from being religious, the Gita is a book of secular wisdom, a self-help book for life, delivered as a conversation between two best friends, the warrior prince Arjuna and his mentor Krishna. Its luminous ideas on self-belief, rightness of action, success, happiness, and doing one’s work with no expectation of reward, but simply as an offering to the universe, are as relevant to children as to adults, as meaningful to Indians as to people of other cultures, and as true to the age it was composed in as to the 21st century.

What’s more, its recommendations are practical, not idealistic, and entirely non-judgmental. There are no saints or sinners in the world, says the Gita, just people who make decisions that are mindful and in tune with their own natures, and people who make decisions that are guided by their emotions and the opinions of other people. As for gods and demons, they both live inside of us, not outside – who we are is who we choose to be.

In the increasingly polarized world that young, confused Arjunas inhabit today, the importance of the Gita’s compassionate guidance, which urges them to make friends with their own Krishna, the wise best friend who lives inside each of them, and trust him to guide their chariots through the battlefield of life, as another Arjuna did so many millennia ago, cannot be overstated.

That is why I wrote The Gita for Children. And because I believe that we are all children where the Gita is concerned, the book is for anyone above the age of 9.

The Gita for Children is published by Swift Press on the 24th of October (to correspond with Diwali), but it can be pre-ordered here: https://swiftpress.com/book/the-gita-for-children/

Roopa Pai is a computer engineer who always knew she was going to write for children. In addition to Taranauts, India’s first fantasy adventure series for children, she has several other published books to her credit, including The Vedas and Upanishads for Children. To make a living, she brings together three other loves – history, working with young people and her hometown in Bangalore – in her day job as a guide with Bangalore Walks, a history and heritage walks & tours company. 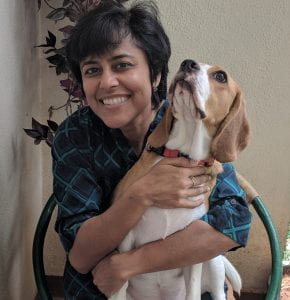