I don’t think that I have written about a collection of books by one publisher before, but I have 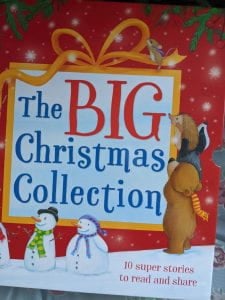 been asked to look at this collection by the supplier Books2door and as it is a group of stories about Christmas (my favourite time of the year, despite the weather), I agreed.  The publisher is also one that I am very fond of; Little Tiger was founded in 1987 and ran as an independent publisher until 2019, when it was bought by  Penguin Random House, but it still maintains its ethos and individualism.  There are ten picture books in this collection and they are a mix of traditional stories and modern tales.  Interestingly there are only two titles that actually have human characters, with the other eight featuring a wide, but familiar range of animals.

“When Granny saved Christmas” by Julia Hubery and 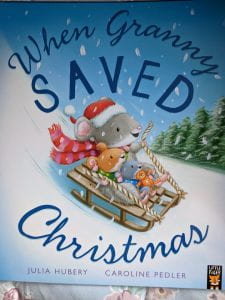 Caroline Pedler is the story of  two small mice, named Bubble and Squeak, who are visiting their Granny for Christmas. But how will Father Christmas know where to deliver any presents and even more worrying, how will he get in the house?  Granny doesn’t have a chimney, but she comes up with an exciting alternative that they can all enjoy. 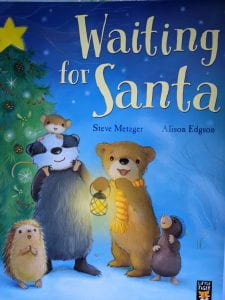 “Waiting for Santa” by Steve Metzger and Alison Edgson  shows us the power of believing and of friendship.  Little bear is convinced that Santa will bring presents at Christmas, but badger is very sceptical as they have never had presents before.  Despite this the friends all decorate a tree, with a star on top and snuggle up to wait for Santa, but will they get the surprise they wanted?  Well it is Christmas and dreams can come true.

“One Snowy Night” by M Christina Butler and Tina 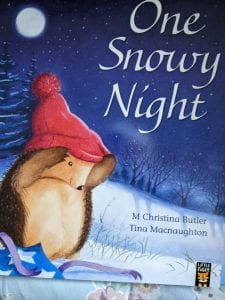 Macnaughton has been a firm Christmas favourite since it was published over a decade ago.  When little hedgehog is woken from his winter sleep he is too cold to go back to sleep, but then out of the sky falls a parcel and it is addressed to him!  Inside is a red woolly hat, but as it doesn’t fit, he decides to give it to his friend.  The hat is passed to several animals before it finally finds its true home and everyone can snuggle down and keep warm. 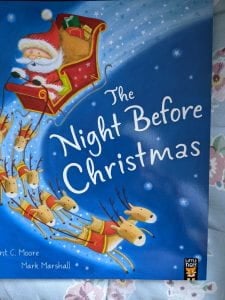 “The Night before Christmas” by Clement C Moore and Mark Marshall.  This is a re-telling of the now classic story of Christmas eve and is probably how most young children have learnt the names of Santa’s reindeer.  As always, this story leaves a nice warm glow.

“The magical Snowman” by Catherine Walters and Alison 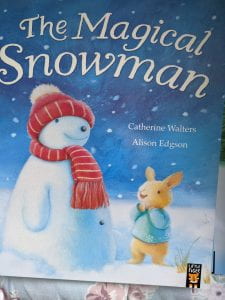 Edgson tells the story of young rabbit, who has spent the morning building a very special snowman.  When he is asked to pick some berries for tea, he sets off and enjoys it so much, he doesn’t see the now start to fall and the visibility disappear.  Magically he is rescued by the snowman and gets home safely. 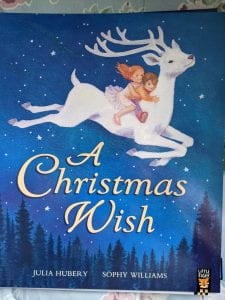 “A Christmas Wish” by Julia Hubery and Sophy Williams is the story of Gemma and her little brother Ty.  When Ty accidentally breaks her favourite tree decoration, Gemma is very upset  and angry.  But then she remembers all the nice things about her brother and when she finds that he has left some glue and a note saying ‘I’m sorry’ outside her door, she realises that the ornament can be mended and she wants to make up with her brother.

“The magic of Christmas” by Claire Freedman and Gail 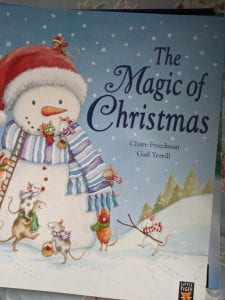 Yerrill  is about the wonder and joy of experiencing your first Christmas celebration.  Little Mouse has never had a Christmas, so he asks his large family what it means to them.  Parents, grandparents, siblings, cousins and other relatives all share their favourite things.  This can vary from making snowmen, sledging, and snowball fights, to Christmas dinner, presents and keeping warm around a fire.  All of the things that we imagine a magical Christmas to be, but mainly it is about sharing with family and friends. 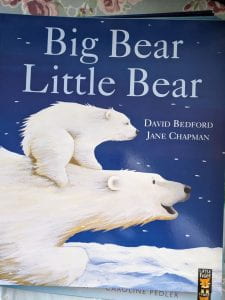 “Big Bear, Little Bear” by David Bedford and Jane Chapman is the delightful story of a polar bear and her cub.  The latter wants to grow up as big and strong as his mother and to be able to do all the things she does, but she explains that when he is big, she won’t be able to give him a ride on her shoulders.  So he decides that growing up is a long term aim, as he loves sharing adventures with his mother.

“A long way from home” by Elizabeth Baguley and Jane 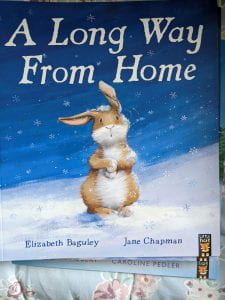 Chapman  tells the story of a young rabbit called Moz, who is being squashed by his siblings in the burrow.  He decides to go outside and  meets his friend Albatross, who offers to take him for a flight.  Unfortunately Moz falls off and ends up in the snow and then inside a huge ice hall.  At first it is exciting, but then he gets scared and misses his family, so he manages to escape from the ice.  Luckily Albatross finds him and he is soon back in the warmth of the burrow and the cuddles of the family. 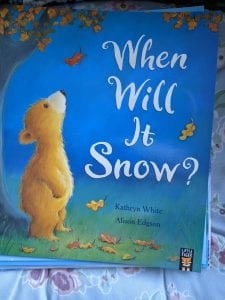 “When will it Snow?” by Kathryn White and Alison Edgson  features another young bear who is longing to see snow.  However his mother tells him that bears hibernate when the snow arrives, so he will not be able to seethe winter.  So little bear asks his friends, mole and squirrel, what snow is like and they explain about the way it falls, goes slushy and how you can make snow angels.  They also confirm that they will be out playing in the winter weather and bear is worried that they will forget about his during the winter and that he will lose his friends.  But as we all know, true friends do not forget about you over a short period of time and all is well in the end.

All of these stories have been published over the last couple of decades, but I think this shows the enduring love and fascination that we have with winter and specifically Christmas. There  are themes around friendship and family, but the stories often also address some of the fears that young children have about whether Father Christmas needs a chimney any more.  this collection is one of several from this publisher and they have always provided a solid basis for school collections about this time of year; they also work brilliantly with individual families as they build their own winter traditions.  Reading these stories has really helped start my preparations for the festive season, although decorations will have to wait until December!