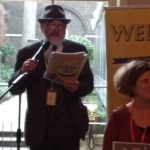 “What on earth is she going on about?  What Chickens?”  Well in the publishing world this can only mean the fantastic Chicken House Books, founded and run by the amazing Barry Cunningham (yes, he did sign up J K Rowling).  Yesterday I had the great pleasure of attending one of their ‘Big Breakfast’ events, where they present authors and books for the coming year.  It was held in central London, in the rather elegant surroundings of Home House (pronounced Hume like the prime minister?) and we were fed with a range of pastries and loads of tea and coffee.

The event started with an introduction to all of the authors and their books, luckily we were given packs with details of these to take home.  Although the emphasis was on the first six months of the year, there were several titles that will be coming out in the autumn.  We were delighted that so many of the authors were able to attend (I think I counted 10 or 11), however several of the American writers were understandably not there.  The highlight of the day was when several of the authors read excerpts from their new works.  They were all consummate performers and a far cry from the old days, when writers often found it difficult to communicate in person.

“Alice Jones: the Ghost Light” by Sarah Rubin.  This is the second in the series about a young amateur sleuth 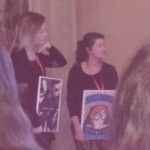 called Alice Jones and I must admit to being a fan.  It fits into that group of writers who would be perfectly at home in the “Golden Age” of crime fiction, although these books are set in the current period.  A great series for those who love Robin Stevens and Katherine Woodfine.

“The White Tower” by Cathryn Constable  is a new title by the author of “Wolf Princess”.  It is describes as “Magic realism” by the publicity and is definitely one that is on my TBR list.

“Mafiosa” by Catherine Doyle is aimed at the older teen and is the climax of the “Blood for Blood” trilogy.  Those who enjoyed the preceding  novels “Vendetta” and “Inferno” will no doubt devour this latest offering and also those who like a gritty and powerful take on their thrillers.

“The Secret Keepers” by Trenton Lee Stewart.  this is the start of a new series by the author of “The Mysterious Benedict Society” and it will be loved by those who like their fantasy/mystery to include a little bit of ‘playing with time’.  A watch that can make you invisible for 15 minutes could be very useful, but villains chasing after you are less welcome.  I am really looking forward to reading this in the next few weeks. 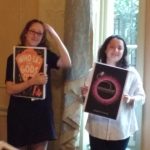 “Who Let the Gods out” by Maz Evans  is a debut novel and features the Gods of Olympus, but not perhaps at their best.  I have been looking forward to this for several months now and have started reading it, so no doubt a fuller comment will be added later.  Since ‘Percy Jackson’ we have seen many authors writing about the various pantheons of gods and I think this may well be up there with the other really good ones.

“The Elephant Thief” by Jane Kerr is due out in March and is a historical novel set in the Victorian period.  When you mix a lonely young urchin with a circus elephant and then send them on a journey it is likely that all kinds of adventures will happen.  This sounds like a book with a warm glow to it.

“Amy Chelsea Stacie Dee” by Mary G Thompson.  This sounds as if it is  not for the faint-hearted but it is sure to find a strong following with those who want a strong story-line and a plot that will take them on a roller-coaster ride.  The age advisory is 14+  for this one

“Moondust” by Gemma Fowler is one of the sci-fi thrillers that seem to be making a splash at the moment.  It is all about mining for a new energy source on the Moon and has strong themes about the environment as well as about the joys and perils of being a teenager. 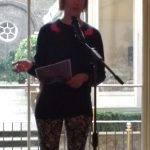 “Beetle Queen” by M G Leonard.  this is the second in her “Beetle Boy” series and is due out in April.  I was very  lucky last year and tool the author out to several schools. She was  tremendous  and the original “Beetle Boy” has seen huge success with lots of award nominations.  I can’t wait to read more about the female villain that makes Cruella de Ville look like a cuddly kitten.

“Bigfoot, Tobin and Me” by Melissa Savage.  We are having to wait until May for this story, but from what I have seen, it will be well worth the wait.  Aimed at the 9+ age group it is about dealing with grief, and since the author is a paediatric grief therapist it is safe to assume that she knows her subject. This is one I am really looking forward to.

“The Island at the end of Everything” by Kiran Millwood  Hargrave is a story of a young girl living with her mother on the leper colony of Culion Island.  When all healthy people are evicted from the island, Ami decides to try and return so that she can see her mother before she dies.  I get the feeling that you should not be reading this on public transport due to the “Heartbreaking” parts of the story. 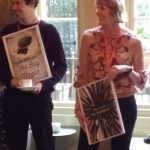 A P Winter and Lisa Drakeford

“The Boy who went Magic” by A P Winter is described in the publicity as “being perfect for fans of Eoin Colfer”.  It is a fantasy, with just a hint of Steam punk (judging by the picture), so I think I am really going to enjoy this one.  It is aimed at what is now called ‘Middle Grade’, so the 10+ age range and will make a great summer read.

Three others that will be coming out later in the year are:

“The Crash” by Lisa Drakeford, which is aimed at the teen market and involves the aftermath of a car smashing in to the sitting room of a house.

“Witch Alone” by James Nicol is the follow up to the very successful “Apprentice Witch”, so this is bound to be another huge hit.

“Secret Cooking Club: Confetti and cake”  by Laurel Remington is the second in this series and I am very hopeful that it will live up to the high standards of the first book.

As you can see, we were spoilt with all the amazing authors and books that were presented at the big breakfast and I am going to have a lot of reading in the coming year.  I hope that you will find some titles that will suit you, or the young people you work with.