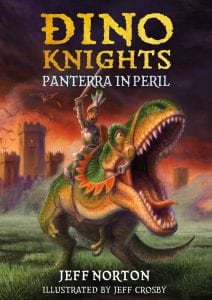 It is always exciting when I receive a new book for younger readers.  Over the years there has been a real problem in finding well written, adventurous and interesting stories that will fire the enthusiasm of our new readers.  Luckily we are in a period where  publishers have realized that young people need to feel inspired by books and are giving many very talented writers and illustrators the chance to create some fabulous books.  It is a real challenge to write a well rounded story, with characterisation and action, when the word count and vocabulary is more limited, but I am delighted to say that Jeff Norton has achieved it.

I think that we would all agree that any book for a young reader depends to some extent on the illustrations that go with the actual text.  The images help young readers interpret and even expand their understanding of the main story, so it is vital that the pictures show the character and overall atmosphere of the story.  Jeff Crosby has done a fantastic job of bringing the world of Panterra to life and we really get a feel for this mythical world and the creatures that are found there. 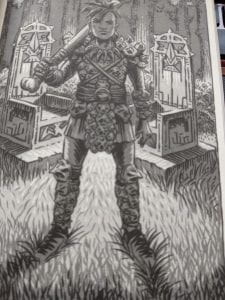 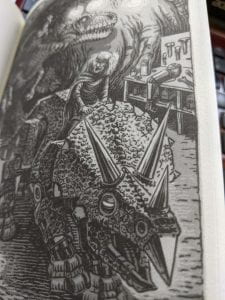 As Jeff Norton explains in his guest post for this launch, the story revolves around a medieval world where dinosaurs had not died out and are used instead of horses by a crack team of young dino knights.  What we also discover is that learning to work as a team and valuing the skills and talents of others is just as important as being brave and willing to fight.  This is a fast paced adventure story for those young readers who prefer their stories to be full of action.  We have the young hero, Henry Fairchild, who was found as a baby and has a close link with the dinosaurs he looks after and then we have the evil Sir Neville who wants to take over the kingdom, using a force of Pterosaurs that he has bred and trained.  I can really imagine many young readers will be using their toy dinosaurs in order to re-enact the skirmishes in this book and no doubt they will use their imagination to take the story to a higher level.  Thank you Jeff for this explanation of how the story came about, I know it is going to be the start of a fantastic series (at least, I hope it is?)

On juggling being a father with writing for kids

I’m not sure I can take full credit for the idea behind DINO KNIGHTS. That would have to go to my then two-year-old son, Torin. It was the middle of the night, about three in the morning, which of course for two-year-olds is the perfect time to party.

So, we were up, playing with all of the toys in the living room. I was half-asleep but he was fully awake. Torin grabbed one the many plastic dinosaur toys we had (an Albertosaurus, if memory serves) and placed one of his older brother’s plastic knights on top of it, to ride on it.

It was a genuine eureka moment. Suddenly, I could see a whole story world with brave knights riding into adventure on the backs of dinosaurs. Camelot meets Cretaceous!

I quickly grabbed a pencil crayon and some paper and sketched out a drawing of the dino-riding knight and then Torin and I played with the dino knights on the living room floor until it was time to go (back) to bed.

The next day, I couldn’t shake the idea, so I started to write. I created four brave knights, one of whom I named after Torin, and a character called Henry, who was a lowly stable boy who dreamed of being a dinosaur-riding knight.

As the story took form, the themes emerged: courage, loyalty, and bravery. This was a tale about young people facing down a threat. They would have to work together as a team to defend the realm.

My writing process usually starts this way, with a singular idea or a character. I start with something very specific and then build out from there. I’m a big believer in the “one pager”, distilling down the core concept into a 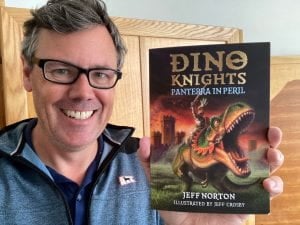 laser-focused articulation of the idea. For me, it keeps the story focused as it unfolds. In the case of Dino Knights, I then wrote an overview document about the world and the characters. Who are they? What do they want? What are they seeking and what are they afraid of? Everything starts with character, so even a clever idea like Dino Knights doesn’t work unless you care about the characters.

In Henry, I wanted someone the audience could identify with and root for. He’s an outsider, someone who doesn’t feel like he belongs and through his own determination and bravery slowly grows to become a valued team member and eventually a leader. But he’s going to make a lot of mistakes along the way, because we all do!

I tend to write in the mornings, often first thing. Torin is now eight and my elder son is eleven, so we’ve got a busy household. I like to get a few hours in at the writing desk every day to keep projects moving forward. I get through a lot of coffee!

You never know where inspiration will come from, so my advice to everyone is to keep an open mind and grab ideas when they come to you, even at three in the morning playing with toys with a toddler.

DINO KNIGHTS by Jeff Norton, illustrated by Jeff Crosby is out now in paperback (£6.99, Scallywag Press)