They say that truth is stranger than fiction, but in this case it is definitely a case that the fiction stems directly from real events.  The world of children’s literature has long been the natural home of stories featuring animals, both wild and domesticated.  From ‘Wind in the Willows’ to ‘Watership Down’ we have grown up with these glimpses of life for other creatures.  In the last couple of decades we have seen a focus on more animals that we think of as being domesticated, although in the stories they are often feral and very wary of the human world; characters such as ‘Varjak Paw‘show a slightly different side, being more akin to Yowl with his connection to humans.  The characters that we find in this story are a mix of domesticated and wild and they share an uneasy truce, in the face of a common enemy. 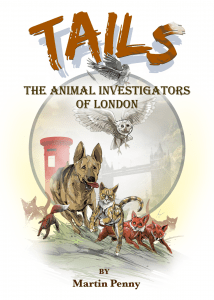 This particular new story features a collection of animals, all of whom live in the London  suburbs; it is based on true life events that took place in Croydon, starting in about 2010.  The central character is a young kitten called Yowl and he has just moved to a new home with his owners  and their young daughter, Lucy.  We follow this young and intrepid kitten as he gradually meets his neighbours, both feline and canine.  He is then gradually introduced to some of the surrounding wildlife, in the guise of pigeons, squirrels and even a family of foxes.  What really brings all of these creatures together is the realization that cats have been disappearing over the last year or so, something like 70 of them,  and the human ‘authorities’ have decided that it is all the fault of wild foxes.  As with any really good detective story, we are given a set of clues and a central character who has the ability (with the help of older and wiser friends) to sort through the evidence and find the likely culprit.

The hero, Yowl, may be young but he is very intelligent and has learnt to understand human speech and written words, from watching television and reading the local paper!  However, at no time does he lose his character as an animal and his encounters with a ‘litter tray’ can be quite amusing.  I love the underlying humour and also the tensions that exist between the various species.  There are some real lessons to be learnt about accepting people who are different, showing empathy and treating others as you would wish to be treated.  It is definitely a recommended read for KS2 children.  I look forward to further adventures for this intrepid band of friends.

About the author: Martin Penny is a cat lover originally from London, the son of a
BBC sound engineer who worked on the Goon Show, he
takes after his mother who used to say, ‘a home isn’t
complete without a cat’. The character of Yowl is based on
the tabby he got as soon as he left his parents’ home. Later in life, for over ten
years, Martin managed the flagship Oxfam Bookshop in Marylebone High Street
(London) which under his stewardship became one of the most profitable Oxfam
shops in the country. He has been living in Turkey since 2015 where he teaches
English part-time. Ideally, this enables him to dedicate himself to his ‘real’ job as
a writer. Already the author of a 7-book crime series, TAILs: The Animal
Investigators of London is his first children’s book. He has enjoyed the company
of Yowl and his friends so much (the pleasure is mutual) that he’s already writing
a new adventure, Yowl and the Fugitive from Justice. It seems that Martin’s
brave and enterprising animal friends aren’t going to leave us any time soon!