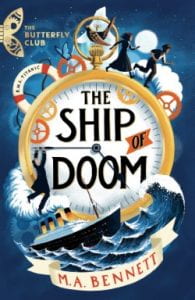 Like many millions of people around the world, I have been a fan of time travel stories since I was a child.  Tales such as “Tom’s Midnight Garden” by Phillipa Pearce”, “The Ghosts” by Antonia Barber” and  “The Gauntlet” by Ronald Welch” introduced my generation to the possibilities of movement in time.  This sub-genre has become increasingly popular in the last generation or so and a basic search on websites such as Waterstones and Amazon will give you a plethora of titles for a wide range of age groups.  However there is one element that most of these books share, namely that the characters tend to find themselves going backwards in time and only a few authors have taken the heroes forward into an unknown future.  This new series manages to find a compromise with this situation, so read on, to find out how it was done.

The Butterfly Club is the title of the series and it gets its name from a premise that  states “if a butterfly flaps its wings in one part of the world, then there will be a much larger event happening on the other side of the world”  Basically, it is a case of “Cause and Effect” and although I can’t think of many titles that use this construct, a brilliant example of its use is “Mortal Chaos” by Matt Dickinson.  M A Bennett has used this idea to bring together a group of adults, many of them well-known, who are part of a secret organization that has managed to ‘discover’ the secret of time travel.  The young people at the centre of the events find themselves 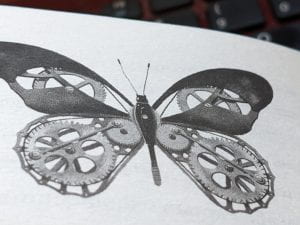 there because of their family links to the club.  Luna is living with her aunt, due to the ‘disappearance’ of her father; Konstantin is the son of a German member of the group, and Aidan is the son of an Irish engineer.  Whilst the story starts in 1894, the children are asked to travel forward to 1912, in order to ‘steal’ information about a new discovery called a “wireless radio” by Guglielmo Marconi.  they arrive at Southampton and manage to stow away  (with the time machine) on board a very fine vessel, one of the White Star Line ships.  By this point most of the readers will be getting a real sense of trepidation, which is only confirmed as the trio discover the name of their vessel, it is RMS Titanic!

What follows is a mix of an exciting adventure story as the intrepid children try to find the wireless, together with a traumatic build up to the events that befell the ship, crew and passengers.  The author uses the time machine to allow the children to re-live the day prior to the iceberg, so that they can try and prevent some of the small events, which then ended up having a profound impact on what happened.  On each occasion their attempts seem to be thwarted by a sinister figure, with a watch face in place of one eye; but who is he and what is his motivation in wanting the ship to meet its doom?

This is a fabulous read, with some fascinating sub-plots that will resonate with many readers.  The fact that they can only travel between their own time and 1969, means that they are limited in where they can visit.  However the additional premise, that the purpose of the club is to find more modern technologies and bring them to the 19th century, means that there is plenty of opportunity for adventure and even danger.  What we do discover is that each of the young people has a secret and as they gradually become friends they are able to share these secrets with the others.  It will be fascinating to see how these issues play out in the coming stories, but what I can say is that the friendships are only strengthened as the young people learn to support each other.

This is a stunning start to a new series and I cannot wait for the next title in the series “The Mummy’s Curse”; as a fan of Ancient Egypt since childhood this is going to be right up my street.  I am willing to bet that a certain pharaoh might be at the centre of this story, especially as 2022 celebrates the centenary of his tomb being discovered.  Thank you to Welbeck for allowing me to include this excerpt from the book, in order to further whet your appetite.