I am going to start this post by saying that I was not sure about reading this book.  I will admit that I am not a follower of football, so any book on the 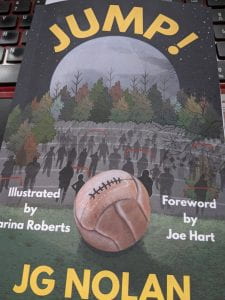 subject really takes me out of my comfort zone.  Football has always been at the periphery of my life, starting with having to keep track of the football results on a Saturday afternoon for  one of my aunts.  Going to library school in Manchester also had an impact as everyone seemed to support United or City.  When I lived in Scotland I was aware of the teams but did not really know them and so my slight links to the sport carried on.  Over the years we have had a large number of books about football, but they tend to be about fictional clubs and players; this is different as it is based around one of the most iconic clubs in the UK.

The central character, Robbie Blair has a lifelong ambition to be a professional football player and with his talent that seems to be a possibility.  Then he suffers several broken bones over a short period and it looks as if his ambitions might be in tatters.  But something strange happens when he has his latest disaster; as he is being carried off the pitch he sees an unknown face 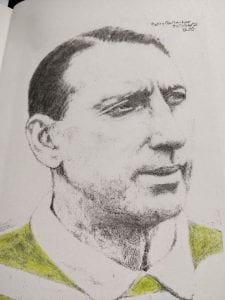 who tells him that “it is never over”.  The story follows Robbie as he starts the long road to recovery, with the help of his friend Jamie (a girl) and a mysterious figure who shows him ways to train and improve his strength and stamina.  The setting is Glasgow and Robbie is a tremendous fan of Celtic football club, so it is not difficult to believe that it is the spirit of Patsy Gallacher, on of the team’s greatest ever players, who is helping Robbie achieve his dream.

This is a book that really took me by surprise.  It is full of emotion on so many levels.  The relationships that Robbie has with his mother is very strong, because his father has left home and they depend on each other.  However she is scared by the injuries that her son has suffered and is determined to keep him safe in the future, even if it means banning him from playing football.  There is a feeling in this story that really reminds me of the film “Field of Dreams”; whilst the stories are very different we have that same sense of determination and an understanding that we can learn from the heroes of the past, who often had to contend with greater challenges that we can imagine in the modern world.

I absolutely recommend this story, it will be enjoyed by boys and girls whether they  are  football fans or not, because it is all about friendship, family and holding on to your dream.  This definitely gets five stars from me. 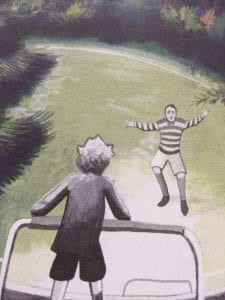