I have previously reviewed the last Flyntlock Bones adventure and you can read it in this blog.  This is a brilliantly funny story that is going to enchant young readers and which is perfect to promote for “Read like a Pirate” day, later in the year.  Children are introduced to pirates at a very young age, but there has often been a gap for those who are just starting to read so called ‘chapter books’, so it is wonderful to find this gap being filled  by such a lovable hero, together with his rather idiosyncratic friends. 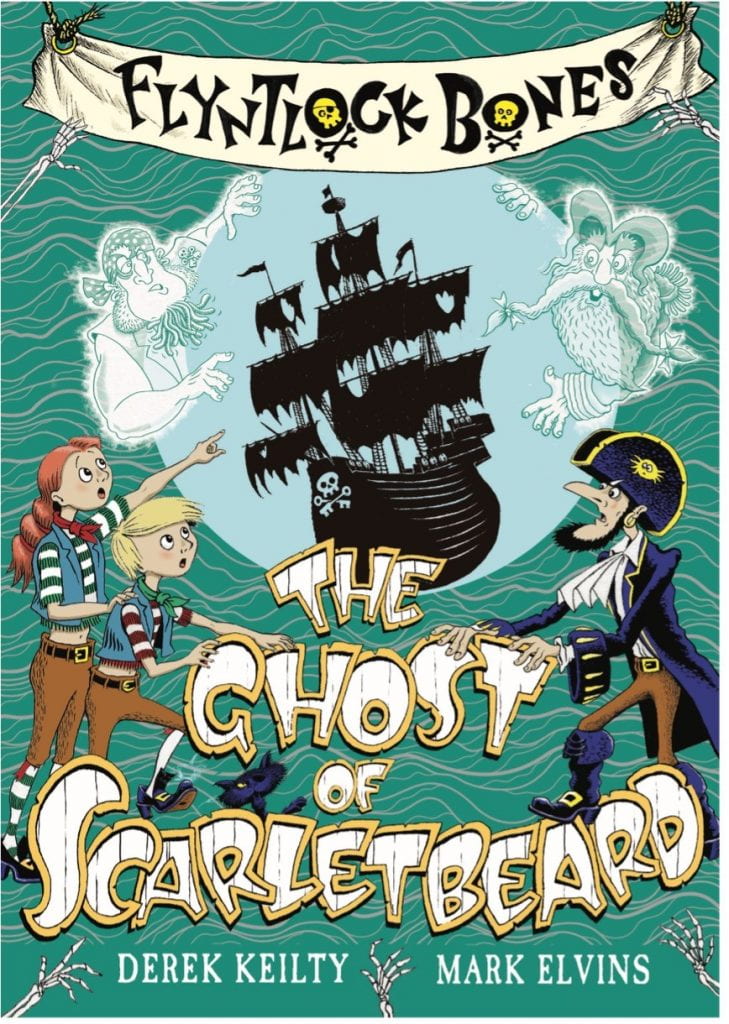 Flyntlock Bones, aka Flynn, is the cabin boy aboard the ex-pirate ship The Black Hound.  Captain Long John Watkins and his motley crew have changed over a new leaf and now work as ‘recoverers of treasure’.  However they are currently having a bit of a slump in business and are quickly running out of funds.  Luckily  they receive a last minute call from a previous client, the Countess of Bohemia.  It seems that her jewels have been stolen yet again and she want the Captain and his crew to retrieve them for the second time.  The only problem is that she swears that it is the same thief as before, who has stolen the treasure;  unfortunately Captain Scarletbeard and his ship were sunk in the last theft!  This leave only one possibility, that the pirate is back from the grave and out for revenge.  Flynn and the rest of the crew face a hazardous journey down to Davy Jones’ Locker to see whether they are right.  What they discover sends a shiver down their backs, as the nefarious pirate is back in business and he seems to have a new partner, in the person of a witch called Molly Macbeth.  It seems the two of them are planning a heist to steal the crown jewels from the Floating Palace of Zora; the question is whether the crew of the Black Hound can stop them and send Scarletbeard back to his watery resting place?

Whilst this is a fantastic rip-roaring tale of adventure it also has a range of more subtle themes going on.  The relationships between the main characters is all about caring for others, but mostly about accepting people for themselves.  We are given a range of characters, most of who have a change of heart about the lifestyle that they have chosen in the past.  Above all, we have a tale full of laughter and fun, where only the really nasty villains get their comeuppance and everyone else finds their perfect place in life.  Once again  this author has given us a book that will thrill the audience and persuade many of them that they want to be pirates (at least for a day).  The illustrations are once again a perfect match for the story and are going to attract the young reader who is just becoming a more confident reader.

Derek Keilty is an Irish author and lives in Belfast.  He has written more than 10 books for children.  His Will Gallows series was previously short listed for the Irish Children’s Book Prize and has been optioned for a film.

Mark Elvins lives in Yorkshire and is a print-maker.