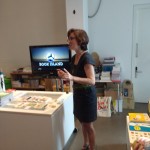 Whilst I am lucky enough to be invited to book launches on a regular basis, it is rare to receive an invite to the launch of an entire publishing enterprise.  However this was the case recently when “Book Island” books held an event to celebrate their arrival in the UK.  Not only that, they are actually based in Bristol.  The company itself is not new, it has been based in New Zealand and this year won an award at the Bologna Book Fair for the ‘Best Children’s Publisher in Oceania’.

The publisher is Greet Pauwelijn who is Belgian by birth but publishes in both English and Dutch.  She specializes in translation of picture books and and give us the opportunity to engage with different styles and attitudes to the genre.  At the moment Greet is showcasing her list and from next year hopes to publish up to eight titles in English and a further group of up to four titles in Dutch.  There has been a lot of interest from the professional press and some really good reviews and I think all of it is very well deserved.

I was lucky enough to get copies of some of her books  and thought that I would share them with you all. 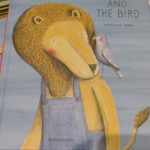 “The Lion and the Bird”  by Marianne Dubuc is a totally enchanting story of two very unlikely friends.  The story itself is one that has been used before, namely a young bird being left behind when the others all begin the long migration in autumn but this interpretation is one of the most sympathetic and moving that I have read.  There are very few words but they are superbly placed to create the necessary impact.  The illustrations themselves are truly magical and the illustrator is not afraid to use the white page in order to create the right atmosphere.  A really amazing book. 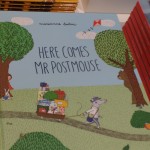 “Here comes Mr Postmouse” by Marianne Dubuc is yet another book by this author and stylistically it is very different. In this story we follow the postmouse as he delivers parcels to a large range of animals.  It is very much a case of following the trail, but the illustrations are full of tiny details that we keep discovering and i think children will keep finding new wonders as they re-read the story.  I am looking forward to reading this with my grandson. 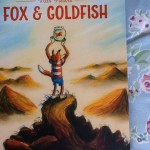 “Fox and Goldfish” by Nils Pieters  is a sombre and yet very lovely story of two friends, one of whom is coming to the end of his life.  When Fox realizes that his friend is coming to the end, he embarks on the trip of a lifetime with Goldfish and they enjoy life and companionship for the final time.  The author has filled the book with bright colour (with some dark pages) and with a tremendous  exuberance for life.  This would be an exceptional read to help young children cope with bereavement. 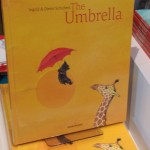 “The Umbrella” by Ingrid and Dieter Schubert. In this book the authors have produced a wonderfully visual story with no words.  The pictures are full of action and movement and they blow us along as we follow the adventures of the little dog hero as he clings on to a bright red umbrella.  The story takes us around the world, narrowly escaping disaster on several occasions, until finally we are all brought safely home again.  The expressions found on the dog’s face are a joy to behold.

Good luck to Greet and Book Island and I hope that the United Kingdom does indeed prove to be their own ‘book island’. 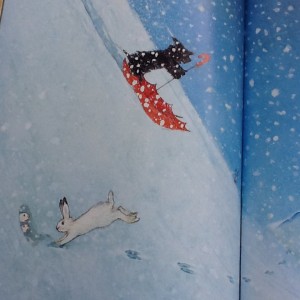 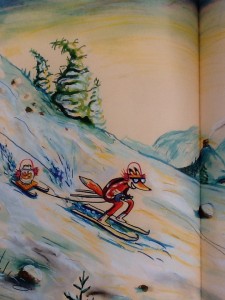