Monday 22nd June was a fantastic day despite the really horrible weather.  The reason was the annual celebration of the best in Children’s Literature for the past year as shown in the Carnegie and Kate Greenaway awards.  You could say that I am somewhat biased as I had the great honour to chair the panel of judges in 2010 when Neil Gaiman won with “The Graveyard Book”  http://www.carnegiegreenaway.org.uk/2010awards/media_ceremony.php?file=1 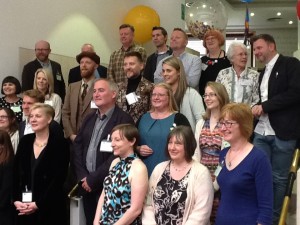 This year had proved a mammoth task for the judges with over 90 titles put forward for Carnegie and 70 books listed for the Greenaway.  this was then pruned down to a more manageable number for the long-list and then finally the shortlist.  The titles that made it through the process were by a wide range of new and also well known and loved authors and illustrators; the thing they had in common was the immense quality of the work they produced and they way that this spoke to the audiences.

The award ceremony was back at the British Library after a break of several years and I know that for many of us it felt like a spiritual homecoming.  The conference centre foyer was buzzing as people met up with friends and colleagues from libraries and publishing.  All of the shortlisted nominees were there and were pounced on by their fans from the shadowing schools that had been invited, as well as by their adult fans as well.  The ceremony itself was full of laughter, with Mel Giedroyc (from Great British bake Off) acting as the compere and proving what a funny person she is.  The announcements themselves were greeted by loud cheers (and perhaps some secret sorrow, if your own choice did not win) and we then returned to the foyer for drinks and canapes, although you had to be quick to actually get any food.  The winner of the Carnegie medal is the lovely and truly talented Tanya Landman  for “Buffalo Soldier”, whilst the Greenaway medal has been won by new talent William Grill for his book “Shackleton’s Journey.” 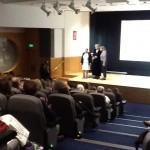 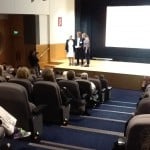 It was an occasion to catch up with old friends as well as meet some new people.  It also made me think that I will have to catch up with those books I have not read yet, but most importantly it reminded me that nominations for this year will open in September and I need to start writing a list of titles that I think should be on the list.

Congratulations to everyone involved. 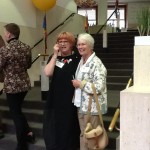 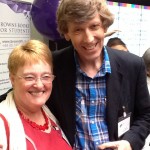 Tim Bowler with Tricia Adams of the SLA